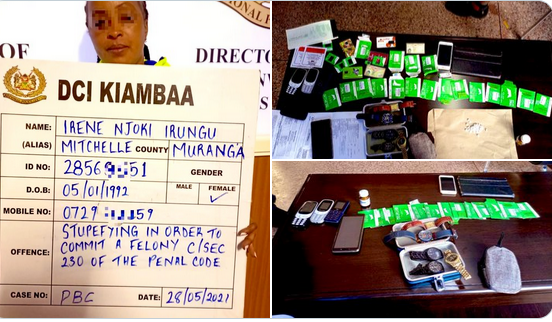 Detectives from the Directorate of Criminal Investigations (DCI) arrested Irene Njoki Irungu on suspicion of stupefying unsuspecting revelers in Kiambu county and its environs on Friday.

According to a police report issued shortly after her arrest and detention, the suspect would ostensibly pose as “Michelle” in order to protect her identity.

In what detectives discovered to be a criminal ring affecting watering holes in Kiambu and Ruaka, the suspect and her accomplice Peter Irungu, who is also in custody, would prey on unsuspecting patrons by spiking their drinks before robbing them.

“Irene is suspected to be heading a syndicate of notorious criminals who prey on unsuspecting revellers, making merry in drinking joints within Ruaka and its environs in Kiambu county.” the police report explains.

According to the detectives, the drug they were using to stupefy revelers would knock out their victims for more than 12 hours, allowing them to flee with their loot for miles.

“She has perfected her art in what is commonly described as ‘wekaing Mchele’ to the point of acquiring dozens of SIM Cards, where she deposits money stolen from stupefied victims’ bank accounts, then once the money has been successfully transferred, she withdraws it without raising any suspicion,” the police report noted.

Detectives in Kiambaa had received reports from tenants that they had lost all of their household items, including bedding and utensils, after entertaining a reveller who matched the description of the suspect.

During her arrest, detectives recovered mobile phones and wristwatches believed to have been stolen from her victims.

“Dozens of SIM cards, mobile phones and wristwatches suspected to have been stolen from her ‘Mchele’ victims were recovered from her custody. Also arrested was one Peter Irungu Wambugu, who is suspected to be an accomplice in the trade,” the report says.

A drug commonly used to treat panic attacks was also discovered in her possession.

Detectives believe she used the same drug to entrap her victims before robbing them.