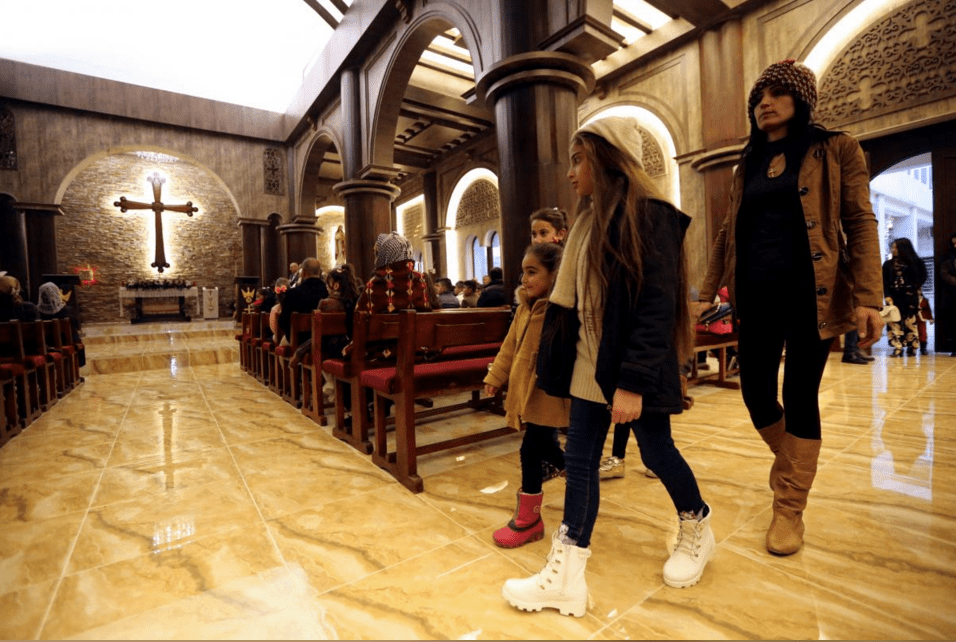 Like every other resident of Teleskof, this was Daoud’s first Christmas back home in three years, since Islamic State militants overran her town and forcibly displaced its 12,000-strong Chaldean Christian community.

“It’s so special to be back in my church, the church where I got married, the church I raised my children in,” the school headmistress said, tears in her eyes.

Faced with a choice to convert, pay a tax or die, Daoud, like many other Christians in the Nineveh Plains, chose to flee. Most sought refuge in nearby towns and cities, but many sought permanent asylum abroad. Though the militants were only in Teleskof for a few days, residents only began returning home earlier this year.

On Sunday, they celebrated their first Christmas together again at the town’s main church, which was overflowing. Hundreds of congregants, dressed in their finest, poured in to pray and receive communion from Father Salar Bodagh, who later lit the traditional bonfire in the church’s courtyard, a symbol of renewal he said.

Despite the obvious joys of being able to celebrate openly once again, it was a bittersweet Christmas for most across the Nineveh Plains, the epicenter of Iraq’s ancient Christian communities which can trace their history in the country back two millennia.

Though Iraq declared full victory over the militants just two weeks ago after a brutal three-year war, the damage done to Christian enclaves was extensive, and left many wondering whether they could overcome their recent history.

Islamic State ravaged Christian areas, looting and burning down homes and churches, stripping them of all valuable artifacts and smashing relics.

The damage in Qaraqosh, a town 15 km (10 miles) west of Mosul also known as Hamdaniya, was extensive, particularly to the town’s ancient churches.

At the Syrian Catholic Church of the Immaculate, congregants gathered for midnight Mass on Sunday surrounded by scorched and blackened walls, still tagged with Islamic State graffiti. They also sat on donated plastic chairs – the church has not yet been able to replace the wooden pews the militants used to fuel the massive fire which engulfed the church.

Most families will require tens of thousands of dollars to repair their homes and replace their stolen goods. But most say they can overcome the material damage, unlike the forced separation of their families.

Before the militant onslaught, Qaraqosh was the largest Christian settlement in Iraq, with a population of more than 50,000. But today, only a few hundred families have returned. Entire congregations have moved overseas, such as the Syriac Orthodox congregation of the Church of Mart Shmony.

On Saturday afternoon, Father Butros Kappa, the head of Qaraqosh’s Church of the Immaculate was trying hard to summon any sense of hope to deliver his congregation during Christmas Mass.

“We’ll have a Christmas Mass like in previous years, but this year, ours will be a joy soaked in tears, because all of our people have left Iraq,” said Father Kappa.

Holding Mass in the singed and upturned ruins of his church was therefore important, he said, “to remind everyone that despite the tragedies that have befallen us, we’re still here.”

‘No future for us’

In Teleskof, 30 km (20 miles) north of Mosul and itself one of the oldest continuing Christian communities in the world, some families were skipping Mass altogether upset at their forced dispersal.

“We usually celebrate with our entire family,” said Umm Rita, as she prepared the traditional Christmas Day dish of pacha (sheep’s head, trotters and stomach all slowly boiled) at her home. “But how can we be happy this year? Our brothers and sisters, even my own daughter, her husband and child I’ve never met have all moved away.”

Amid ongoing tensions between the central government in Baghdad and Iraq’s Kurds after a referendum on Kurdish independence was held over Baghdad’s objections in September, Teleskof’s residents fear violence once again. “We just want to live in peace,” said Umm Rita. “We are more anxious now than when Islamic State was in our homes.”

“Our community has been gutted,” said Firas Abdelwahid, a 76-year-old former state oil employee, of the thousands who have sought permanent shelter overseas. Watching children play by the church bonfire, he felt melancholy.

“But what do we expect? The past is tragic, the present is desperate and well, there is no future for us Christians in Iraq.”