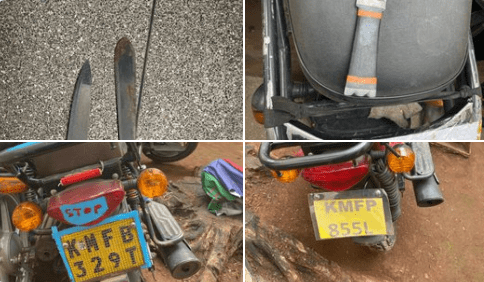 Detectives in Nairobi apprehended three armed suspects who were planning to attack motorists on the Southern bypass on Sunday.

According to a police report obtained by Citizen Digital, the suspects, Brian Mwangi and Nickson Muchiri, both 25, were apprehended following a well-executed operation carried out by Langata-based Police Officers.

A third suspect, a 15-year-old boy, was apprehended as he fled to the nearby Ngong forest to avoid capture.

In the thorough operation staged by the officers, two motorbikes used by the criminals as a means of escape were also impounded.

Their arrest comes on the heels of a string of attacks on motorists along the busy highway.

Only a week ago, six other suspects were flushed out of the forest in a similar operation after they attacked a motorist and his three-year-old son.

The suspects will be arraigned in court on Monday to answer to charges of preparing to commit a felony, contrary to section 308 (1) of the penal code.

Four days ago, police in Lang’ata arrested six armed gangsters who have reportedly been violently robbing motorists on the Southern bypass.

The six were arrested after they accosted a motorist plying the route who stopped his vehicle to let his son answer a call of nature.

Tom Onyango and his three-year-old son were driving from Nakuru to Nairobi when they were attacked by the thugs near the virtual weighbridge.

Thereafter, Mr. Onyango filed a report at the Lang’ata Police Station, upon which a contingency of officers drawn from various units as well as a tracker dog were dispatched.

The gangsters were nabbed in a nearby forest where they had reportedly taken cover after committing the crime.

Three of them were positively identified by Mr. Onyango and his son as those who had attacked them.

The officers appealed to motorists who have previously been attacked on the busy highway to report to Lang’ata Police Station and assist in identifying the suspects.