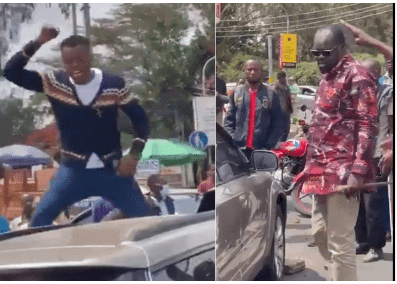 Blogger Robert Alai was on Friday arrested and detained at the Kilimani Police Station on allegations of beating artist Ringtone Apoko with a wooden club.

According to officials familiar with the situation, the two accused each other of obstruction in a scuffle that began on Loitoktok Road and spread to Dennis Pritt and Likoni Roads.

Mr. Alai was accused of hitting Ringtone’s car at a roundabout on Loitoktok road.

Although the genesis of the drama remains unclear, several videos showed what is believed to be Mr Alai’s car blocking the musician’s car.

In one of the videos, the musician can be seen picketing from top of his car before crossing to Mr Alai’s car and demanding an explanation.

In yet another video, Ringtone appears again, but this time, with blood on the side of his face and what appears to scratches on his neck.

He is said to have gone to hospital after the incident.