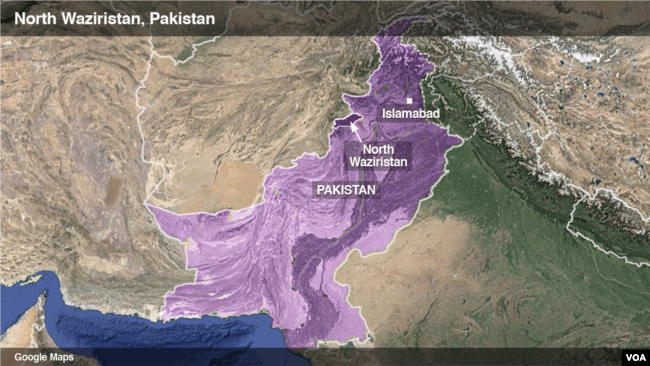 An army spokesman said a security force convoy was traveling through the Kharkamar area of the remote North Waziristan district when it was hit by an improvised explosive device that terrorists had planted on the road.

A lieutenant colonel, a major and a captain were among the dead.

The military noted the attack took place in an area where security forces had “conducted search operations and arrested a few facilitators” of recent terrorist attacks in the North Waziristan district. The increase in violence during the last month has killed at least 10 soldiers and injured 35 others, it added.

Meanwhile, officials in southwestern Baluchistan province said two separate bomb blasts Friday killed at least five people and injured more than 12 others. The victims were members of Pakistan’s minority Shi’ite Muslim community, they added. Separatist ethnic Baluch groups and militants linked to the outlawed Pakistani Taliban, as well as Islamic State,  are active in the province.

There were no claims of responsibly for both the attacks.

Police have since rounded up around two dozen PTM activists, including two central leaders, on charges of attacking security forces and disturbing public order.

The detained PTM leaders, Mohsin Dawar and Ali Wazir, who are elected members of the Pakistani parliament, strongly rejected the allegations and instead claimed troops fired on peaceful protesters who were agitating against alleged military abuses and demanding the release of their supporters.

The Pakistan government and the military in particular are accused of blocking news coverage of PTM rallies and related public activities. PTM has been accused of trying to incite ethnic-based violence at the behest of intelligence agencies of neighboring India and Afghanistan, charges the rights group rejects as baseless and propaganda.

North Waziristan had long been condemned as an “epicenter” of international terrorism by the United States for harboring al-Qaida and other transnational terrorists, as well as members of the Taliban insurgency in Afghanistan.

Under persistent U.S. pressure, Pakistani troops undertook a major ground and air offensive in 2014, dismantling terrorist infrastructure and bringing the region under state control for the first time in decades. A unilateral Pakistan military-led construction effort is currently installing a fence and establishing new outposts to block terrorist infiltration in either direction along the nearly 2,600-kilometer border with Afghanistan.

The PTM says it is fighting for the rights of ethnic Pashtun families in and around the North Waziristan district, who had suffered because of military operations in their areas and whose loved ones were rounded up illegally by security forces.

“By intimidating reporters and by using various forms of pressure on media editors and managers, the military establishment has imposed a de facto ban on coverage of the PTM,” noted Reporters Without Borders in its latest statement on the situation.

The U.S.-based Committee to Protect Journalists, in a recent statement, also denounced the ban on PTM and said it has generally documented a rising trend of censorship owing to pressure from the military in Pakistan.

Government officials strongly defend the media blackout of PTM rallies, although they support the group’s demands for stopping the practice of enforced disappearance, clearing the border areas of land mines laid during the counterterrorism operations, and removing “unwanted” security outposts. The military says it is in the process of clearing the mines and gradually reducing outposts with the improvement of security in the North Waziristan district.

While condemning Friday’s attack on the military convoy in the North Waziristan tribal region and paying tribute to soldiers’ sacrifices, Prime Minister Imran Khan, in a veiled reference to PTM, said that “some miscreants are misguiding the tribal people, but the state will not allow them to disrupt peace.”