Arrests in Cameroon for corruption, or challenges to Biya? 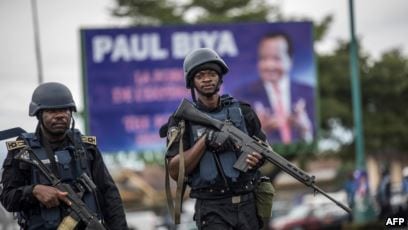 The recent arrest of a former official in Cameroon for alleged corruption has sparked a debate over whether the government is actually trying to stamp out corruption, or is cracking down on anyone it sees as a challenger to longtime President Paul Biya.

Former defense minister Edgard Alain Mebe Ngo’o was arrested along with his wife and three of his close collaborators.

Political analyst Eugene Mbida says Mebe Ngo’o had occupied several strategic positions, including the director of Biya’s cabinet, police chief, minister of transport and defense minister — who was instrumental in arresting people considered as opponents of Biya. Mebe Ngo’o was widely viewed by Cameroonians as the emblematic future president, according to Mbida.

At least two dozen former government officials have been arrested and imprisoned in Cameroon over the past 10 years, including a former prime minister, several ex-ministers, and heads of state-owned corporations.

The charges against Mebe Ngo’o have not been made public, though corruption is said to be the cause of his arrest. The other officials were arrested on embezzlement charges, but they say they are political prisoners who are suffering for raising their voices against Biya’s 37-year stay in power.

Former Health Minister Urbain Olanguena Awono, in his book titled Mensonges d’Etat (Lies of the State), says he and other detainees are “prisoners of conscience.”

Jacques Mfeugue of the Yaounde-based Center for the Promotion of Good Governance says the only way for citizens to know if officials are stealing from the public purse is if officials are forced to declare their assets before taking office.

In addition, he says, Cameroon should upgrade the audit bench of the Supreme Court to an autonomous court that investigates financial crimes.

The government denies that Biya persecutes those who oppose him and insists that it fights only corruption. It says the country has lost about $1.5 billion in stolen funds over the past decade, and that the anti-corruption body recovered about $260 million last year.