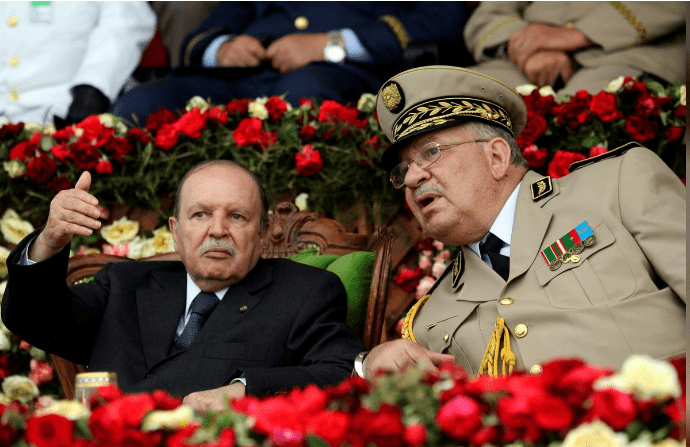 Algeria’s powerful army chief of staff called on Tuesday for a constitutional move that would see President Abdel Aziz Bouteflika declared unfit for office following weeks of mass protests, signaling an end to his 20-year rule.

Lieutenant General Ahmed Gaed Salah, addressing army officers in a speech broadcast on state TV, called for a unified stand to defuse tensions in the sprawling North African state, a major oil and gas exporter.It is rare for the army to directly intervene during crises in Algeria but the hundreds of thousands of people who have been pushing the ailing Bouteflika to step down, as important allies deserted him, prompted the military to try and restore order.

Salah said the solution would be based on Article 102 of the constitution and achieve a consensus of “all visions and parties”. That article applies under certain conditions, such as deteriorating health. Bouteflika, 82, has rarely surfaced in public since suffering a stroke in 2013.

The next formal step is for the constitutional council to formally to declare Bouteflika unfit for office, a decision that members of parliament’s lower and upper house need to ratify by a two-thirds majority.

Based on Article 102, the chairman of parliament’s upper house, Abdelkader Bensalah, would serve as caretaker president for at least 45 days in the nation of more than 40 million people.

On Tuesday night, the Huffpost Maghreb said a protest leader had rejected the army’s attempt to have Bouteflika declared unfit, saying the people instead wanted a national government of consensus – not a continuation of the aging and secretive elite entrenched in power since independence from France in 1962.

“The Algerian people don’t accept that the government, or a symbol of power of this system, manages the transition period,” lawyer Mustapha Bouchachi said, according to the online outlet.

Algerians will face uncertainty for some time. A critical factor will be the position of the military, which is likely to act as a kingmaker, as it has done in past decades.

There is no obvious candidate for the presidency now. For years, rumors have swirled about potential successors, but no one credible has emerged with the backing of the military, the political and security establishment and is not at least 70.

Louisa Driss, a political science professor at Algiers University, said Salah’s announcement would not placate protesters, and the elite would try to preserve its interests.

“This announcement is also a declaration of inadmissibility with regard to the claim for a democratic transition,” said Driss. “Which brings us back to the hypothesis of a (replication) of the political system without Bouteflika.”

The last time the generals stepped in during a crisis in Algeria was in 1992, when the generals canceled an election that Islamists were poised to win.

That move triggered a civil war that killed an estimated 200,000 people. Algerians have dark memories of that conflict and the military is highly sensitive to any instability.

The stakes are high, for Algeria is a leading member of OPEC and a top gas supplier to Europe, though so far oil and gas output appears unaffected by the unrest, an International Energy Agency (IEA) official said on Tuesday.

Algeria is also regarded by Western states as a partner in counter-terrorism, a significant military force in North Africa and the Sahel, and a key diplomatic player in efforts to resolve crises in neighboring Mali and Libya.

Bouteflika, among the veterans of the 1954-62 war of independence against France who dominate Algeria, consolidated his power by outfoxing would-be rivals in the military and security services, and containing grassroots discontent.

When the “Arab Spring” protests toppled Arab leaders across the region eight years ago, oil revenues enabled him to boost state spending and buy peace in the streets.

But Algerians have since lost patience with unsuccessful efforts to reduce unemployment, ease daily hardships and tackle high-level unaccountability, corruption and nepotism.

In the latest unrest, one ally after another abandoned Bouteflika, emboldening protesters.

Bouteflika ran out of options as he became increasingly isolated and failed to buy time. He bowed to protesters by reversing a decision to seek another term and putting off elections that had been set for April.

But he stopped short of quitting as head of state and said he would stay on until a new constitution is adopted, effectively extending his current term.

“In this context it became necessary, even imperative, to find a solution to end the crisis that responds to the legitimate demands of the Algerian people and which quarantines the rules of the constitution,” Salah was quoted by the state news agency APS as saying.

Thousands of people had returned to the streets of the capital Algiers earlier on Tuesday calling on Bouteflika to resign, keeping up popular pressure.

“The system must go. There is no point for it in resisting,” said Belkacem Abidi, 25, one of about 6,000 protesters, mostly students, who gathered in downtown Algiers on Tuesday.