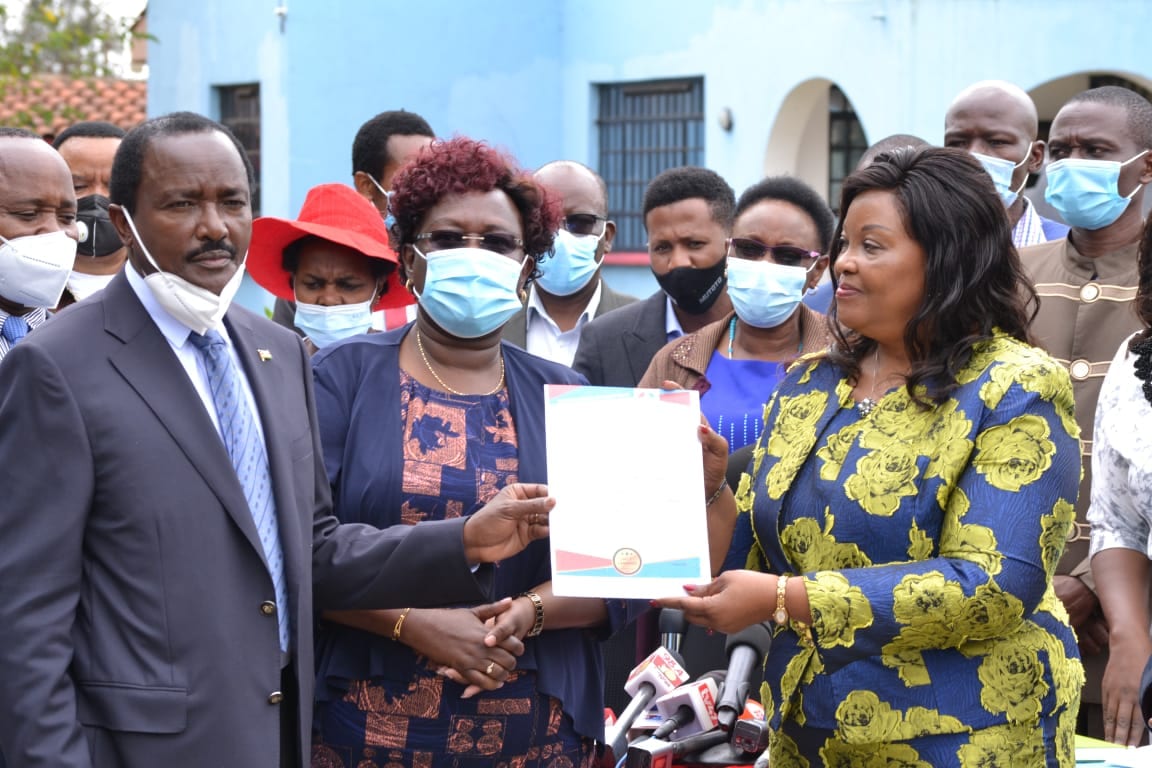 Kavindu was unveiled on Wednesday, January 13 at a press briefing attended by among others, Wiper Party Leader Kalonzo Musyoka.

Speaking during the unveiling, Kalonzo said the party was not keen on the perceived bad-blood between their nominee and her ex-husband, saying the nomination was based on merit.

“As wiper party we have no business in breaking families by nominating Agnes Kavindu Muthama for Machakos seat, we nominated her because of her qualifications but fortunately she shares a name with others,” Kalonzo said.

Kavindu who is a member of the BBI steering committee vied for the Woman Rep seat in 2017, losing to Wiper’s Joyce Kamene.

While accepting her nomination, she vowed to deliver the seat to the Wiper Party in the March duel.

“I’m honoured and humbled to be nominated, I promise the people of Machakos that I will deliver this seat to Wiper” Kavindu said.

She will be going head-to-head with among others Maendeleo Chap Chap Party’s candidate- the former Cabinet Minister Mutua Katuku and UDA’s Bernard Muia- the former deputy Goverrnor.

Senator Mutinda died while receiving treatment at a Nairobi hospital a week after he ended up in the Intensive Care Unit (ICU) following a 21-hour date with a teacher.

He had been admitted at the Nairobi Hospital after he allegedly fell ill while with a woman at an apartment in Nairobi’s Kilimani estate.

The lawmaker is reported to have checked in at the apartment along Elgeyo Marakwet Road in Kilimani on December 3 afternoon accompanied by a woman identified as Esther Muli, a resident of Wote town.

According to a police report on the incident, the matter was reported by the Senator’s wife who said that at around 3am she was informed by an employee at the lawmaker’s office that her husband had been admitted in the ICU.

“She went to the said hospital accompanied by other family members among them her co-wife where she established that the Senator was brought by paramedics after falling sick while in an apartment along Elgeyo Marakwet Road within Kilimani,” read the police report.

Police visited the scene and found the woman who disclosed that she was with the Senator in the apartment when he suddenly started complaining of severe headache and asked her to look for paracetamols.

She added that the pain worsened, and she reportedly informed the management who called for an ambulance and rushed the lawmaker to Nairobi Hospital.

Esther Muli, the woman who was with the Senator at the time of the incident, was arrested and arraigned in court before later being released on a personal bond after tests showed no traces of poison on the deceased’s blood.