'After Raila becomes president I can then retire,' says Onyonka as he ditches FORD-K for ODM 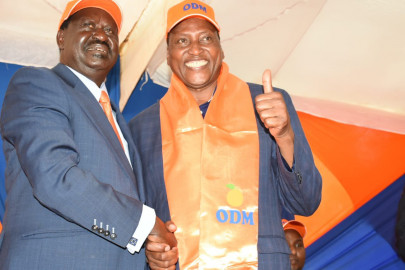 Speaking on Thursday during his official welcoming ceremony at Orange House, Onyoka described Mr. Odinga as a person he highly respects and pledged to support the former prime minister’s presidential bid in the 2022 General Election.

“We pray that God gives you the energy and the strength to become the president of the country because I believe in you, in what you say and what you talk about,” said Onyoka.

Raila Odinga was present at the ceremony to receive him.

Onyoka stated that his story with the ODM leader goes way back, recounting moments from Former President Moi’s era.

“When Raila was being taken to detention in 1982, I was also arrested with him. I have never slept safely listening to him being walked away at night, we thought he was going to be killed. This is the man I have been waiting to be president, then I can retire,” he noted.

The legislator, who is seeking the Kisii County senatorial seat in 2022, tagged along Samuel Omwando and Cynthia Kerubo who had left ODM over what Onyoka termed as misunderstandings during the party primaries.

“These people who have come here are not jokers… We will not leave ODM again,” added Onyoka.

Also present at the event was ODM Secretary-General Edwin Sifuna.