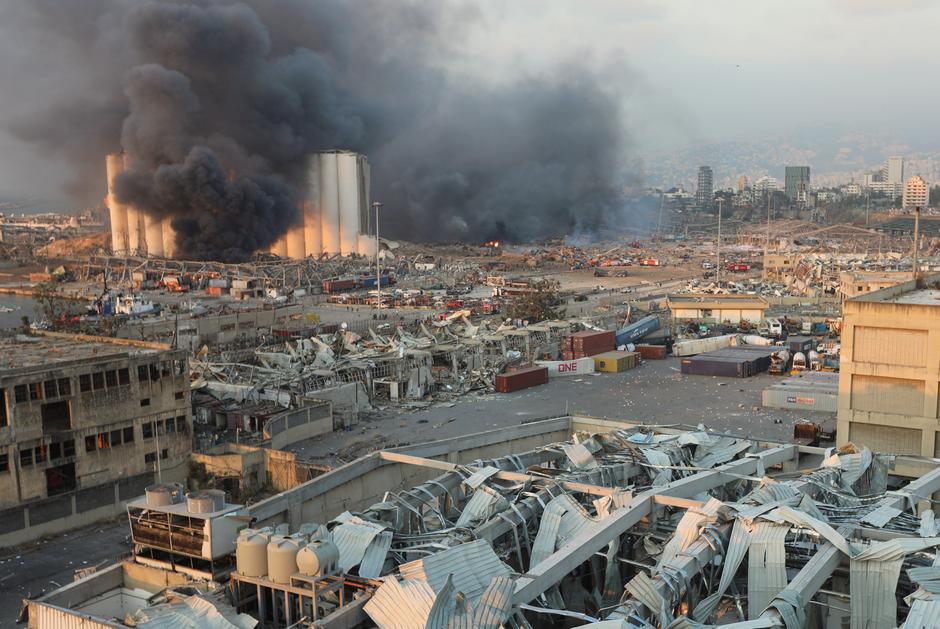 As Lebanon’s investigation into the devastating blast in Beirut continues, officials have pointed to a possible cause: A massive shipment of agricultural fertilizer that authorities say was stored in the port of Beirut without safety precautions for years — despite warnings by local officials.

Documents newly reviewed by CNN reveal that a shipment of 2,750 metric tons of ammonium nitrate arrived in Beirut on a Russian-owned vessel in 2013.

The ship, named the MV Rhosus, was destined for Mozambique — but stopped in Beirut due to financial difficulties that also created unrest with the ship’s Russian and Ukrainian crew.

Once it arrived, the ship never left Beirut’s port, according Lebanon’s Director of Customs, Badri Daher, despite repeated warnings by him and others that the cargo was the equivalent of “a floating bomb.”

“Due to the extreme danger posed by these stored items in unsuitable climate conditions, we reiterate our request to the Port Authorities to re-export the goods immediately to maintain the safety of the port and those working in it,” Daher’s predecessor, Chafic Merhi, wrote in a 2016 letter addressed to a judge involved in the case.

Lebanese authorities have not named the MV Rhosus as the source of the substance that ultimately exploded in Beirut on Tuesday, but Prime Minister Hassan Diab said the devastating blast was caused by 2,750 tons of ammonium nitrate. He added that the substance had been stored for six years at the port warehouse without safety measures, “endangering the safety of citizens.”

Lebanon’s general security chief also said a “highly explosive material” had been confiscated years earlier and stored in the warehouse, which is just a few minutes’ walk from Beirut’s shopping and nightlife districts. Tuesday’s massive explosion, which rocked the capital, left at least 135 dead and 5,000 injured.

On Wednesday, Lebanese Information Minister Manal Abdel Samad Najd said there are papers and documents dating back to 2014 proving the existence of an exchange of information about the “material” confiscated by Lebanese authorities. She told Jordan’s state-owned channel Al Mamlaka that the exchange is being considered in relation to the potential cause of the deadly Beirut blast.

Asked in a telephone interview if there are any early findings in the investigations related to the cause of the explosion, she said, “There are no preliminary results or clarification.”

In 2013, the MV Rhosus set off from Batumi, Georgia, destined for Mozambique, according to the vessel’s path and the account of its captain Boris Prokoshev.

It was carrying 2,750 metric tons of ammonium nitrate, an industrial chemical commonly used around the world as a fertilizer — and in explosives for mining.

The Moldovan-flagged ship stopped in Greece to refuel. That’s when the ship’s owner told the Russian and Ukrainian sailors that he had run out of money and they would have to pick up additional cargo to cover the travel costs — which led them on a detour to Beirut.

The vessel was owned by a company called Teto Shipping which members of the crew said was owned by Igor Grechushkin, a Khabarovsk businessman who resided in Cyprus.

Once in Beirut, the MV Rhosus was detained by local port authorities due to “gross violations in operating a vessel,” unpaid fees to the port, and complaints filed by the Russian and Ukrainian crew , according to the Seafarers’ Union of Russia (affiliated with the International Transport Workers’ Federation, or ITF), which represented the Russian sailors, told CNN.

It never resumed its journey.

The sailors had been on the ship for 11 months with few supplies, according to Prokoshev. “I wrote to Putin everyday… Eventually we had to sell the fuel and use the money to hire a lawyer because there was not help, the owner did not even provide us with food or water,” Prokoshev said in a radio interview with Echo Moscow on Wednesday.

They would eventually abandon the ship. “According to our information, the Russian crew was later repatriated to their homeland… the salaries were not paid,” the union told CNN.

“At the time, on board of the dry cargo ship there were particularly dangerous goods — ammonium nitrate, which the port authorities of Beirut did not allow to unload or transfer to another ship,” it added.

In 2014, Mikhail Voytenko, who runs an online publication tracking maritime activity, described the ship as a “floating bomb.”

CNN made several unsuccessful attempts to reach Grechushkin on a Cyprus telephone number.

According to emails exchanged by Prokoshev and a Beirut-based lawyer Charbel Dagher, who represented the crew in Lebanon, the ammonium nitrate was unloaded in Beirut’s port by November 2014 and stored in a hangar.

It was then kept in that hangar for six years, despite repeated warnings from the Director of Lebanese Customs, Badri Daher, of the “extreme danger” that the cargo posed.

At points, he even offered to sell the dangerous cargo to the Lebanese army, according to the court documents, but to no avail.

Daher confirmed to CNN earlier on Wednesday that his office sent “a total of six letters to the legal authorities” but that the authorities never responded to any of their letters.

“The Port Authority should not have allowed the ship to offload the chemicals into the port,” he said. “The chemicals were originally going to Mozambique, not Lebanon.”

On Wednesday, the Director General of Beirut Port Hassan Kraytem told local television channel OTV: “We stored the material in warehouse number 12 at Beirut port in accordance with a court order. We knew that they were dangerous materials, but not to that extent.”

Kraytem too said that the issue of removing the explosive material had been brought up by State Security and Customs — but that the issue had not been “resolved.”

“Customs and State Security sent letters [to the authorities] asking to remove or re-export the explosive materials six years ago, and we have been waiting since then for this issue to be resolved, but to no avail,” Kraytem said.
Maintenance was conducted on the warehouse door just hours before the blast on Tuesday, he added. “We were asked to fix a door of the warehouse by State Security and we did that at noon, but what occurred in the afternoon I have no idea,” he said.

Ammonium nitrate has been implicated in deadly industrial explosions in the past, and is known to require careful handling.

“This is a catastrophic regulatory failure because regulations on the storage of ammonium nitrate are typically very clear. The idea that such a quantity would have been left unattended for six years beggars belief and was an accident waiting to happen.”

Perhaps the closest comparison to Beirut’s explosion, in terms of scale, is a blast in Texas City in 1947, which was caused by 2,300 US tons (about 2,087 metric tons) of ammonium nitrate. The resulting fire caused an explosion and additional fires that damaged more than 1,000 buildings and killed nearly 400 people, according to the website of the Texas Historical Association.

Previous disasters linked to the chemical have led to improved regulations for its safe storage, Associate Professor Stewart Walker, from the school of Forensic, Environmental and Analytical Chemistry at Flinders University in

Adelaide, Australia, told CNN said; such rules mean it tends to be kept away from population centers.

“Both of these things will be questioned in the investigation into the Beirut explosion, because they had such a large amount of ammonium nitrate, which may not have been stored appropriately, and in an area where there is a large number of people,” he added.