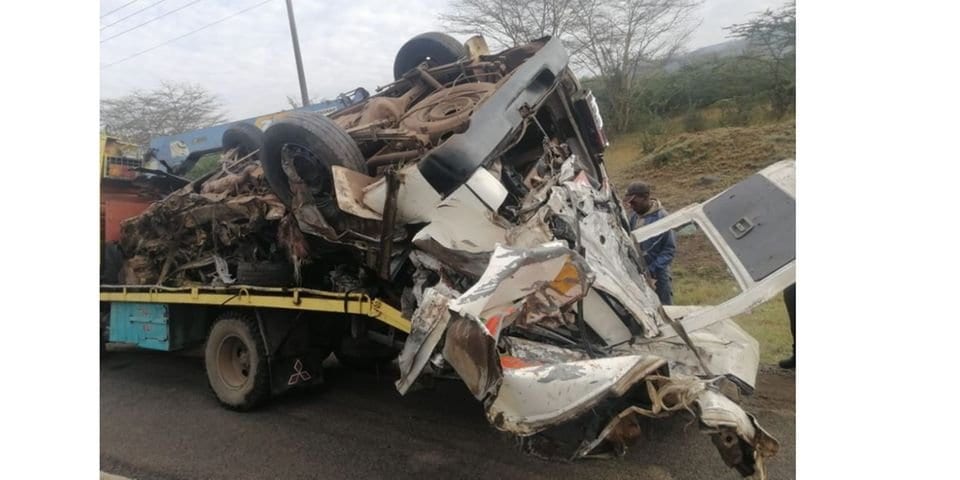 Nine people have been killed in a dawn accident on the Nakuru-Nairobi highway.

The 5am accident in Gilgil also left scores injured.

Area police boss John Onditi said a Nissan Matatu operated by the Molo Saccco collided with a trailer headed the opposite direction.

Reports further indicate that the trailer was overtaking when the accident occurred.

Eight people were killed on the spot while another succumbed to injuries while getting treated at the St. Joseph Hospital.

On Friday morning, traffic police officers pitched camp at the hospital, trying to figure out the exact number of people involved in the accident.

In 2017, police arrested the owner of a bus that left 20 people dead and 20 others seriously injured following a road accident at Soysambu.

According to the National Transport and Safety Authority (NTSA) Director General Francis Meja, the bus was operating without a valid inspection certificate and NTSA license.

Meja stated that preliminary investigations also indicate that the Busia-bound bus was on the wrong side.

“It was dangerously overtaking when the bus collided with an oncoming trailer,” he said.

The driver of the ill-fated bus fled the scene but was later arrested and charged.