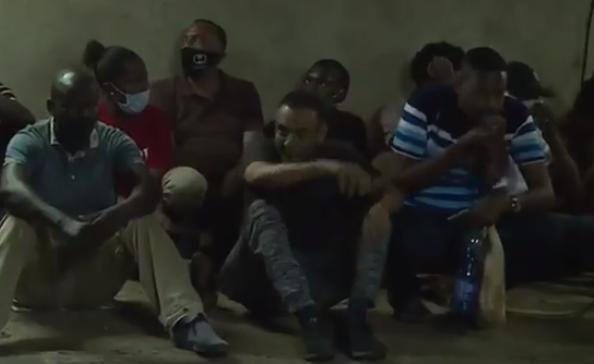 A video shared by the  Nation Africa showed the governor chasing curfew breakers with law enforcement officers hot at his wake.

The team also forced motorists who were outside during curfew to stop and alight from their vehicles.

Those caught were then herded together in a group: videos show the tens of people seated on the dirt, some attempting to make frantic phone calls.

Elsewhere, police officers in Nakuru arrested 86 people at the SEBS bar and restaurant within the town early Saturday morning.

The 86 were part of a group of more than 500 revelers who were holed in the club, partying away in reckless abandon.

Police officers had a hard time restoring order and were forced to lob teargas at the patron after they were attacked with beer bottles,

Videos showed terrified party-goers fleeing the club, some from the windows on the first floor and some through the packed doors.

The latest comes just days after the government announced stricter measures to avert the spread of the coronavirus which has killed more than 1,000 in Kenya and devastated the economy.

Kenyans are now required to wear masks at all times when they are in public, maintain social distance and observe the daily 10pm to 4am curfew.

Those found contravening the guidelines risk a hefty instant fine.