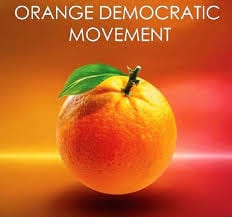 Thirteen aspirants are set to battle for the Orange Democratic Movement (ODM) ticket for the North Kadem Ward by-elections in Migori County.

Speaking to Radio Ramogi, Migori County ODM Secretary Joseoh Olala, said the party is ready to conduct the nomination exercise on June 10, 2018, an exercise which will be conducted in all 28 polling stations.

Mr. Olala warned that the party will automatically disqualify any candidate who shall be found guilty of any violence before, during and after the nomination exercise.

His sentiments were echoed by the county party chairman Philip Makabongo who asked the aspirants to work closely with the party office to ensure the exercise is free and fair.

Mr. Makabongo also asked individuals who are not voters in North Kadem Ward to keep off the ward politics and allow the electorate in the area to make their choice.

The Independent Electoral and Boundaries Commission (IEBC) has scheduled the North Kadem by-elections for August 17th.