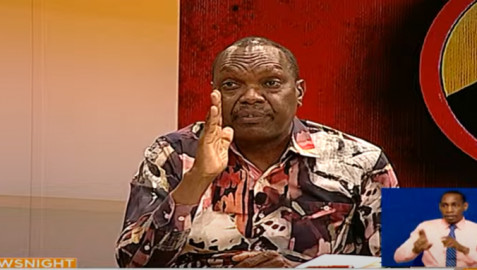 Ndaragwa MP Jeremiah Kioni is confident Deputy President William Ruto will not be the vice-chair of Jubilee after the party’s National Delegates Conference (NDC) slated for November 30, 2021.

Jubilee delegates are expected to converge at Kasarani Stadium on the aforementioned date where President Uhuru Kenyatta is expected to give direction on the future of the party,

According to Kioni, DP Ruto has already made his political stance clear and has been campaigning under the United Democratic Alliance (UDA) party while still in office as such he should not be shocked if he is ejected from Jubilee.

“He certainly cannot continue being a party leader to Jubilee, he has moved to UDA. That’s common sense. I mean if he expects to continue being a deputy party leader of Jubilee then he must be taking many people for a ride and I was saying we will leave it to their conscience,” Kioni explained on Citizen TV’s News Night Show.

“You stood and looked for votes under Jubilee, you did not have the courage to resign, you have moved out of the party and then you have started for four years you’ve been marketing your own party.”

Kioni however insisted that ejecting Ruto and his allies will not be the agenda of the NDC citing instead that the members will be analyzing the initiatives President Kenyatta has been able to achieve in his ten years in office.

Uasin Gishu Woman Representative Gladys Boss however played the defensive card saying UDA and its allies will wait and see if the decision to eject Ruto will be made and they would then make a decision on how to respond based on the legality of the dismissal and the party’s constitution.

Boss however labelled the NDC as ‘inconsequential’ claiming that a mass exodus of members had already occurred and that Jubilee only has a few members left.

“They will have the usual threats. They have already taken their position as the party that failed the aspirations of Kenyans so I do not see if the conference will mean anything. Maybe the only thing left is to threaten the rest of us and say we are going to remove you as a member of Jubilee so you can go to the by-elections and we are saying bring it on,” she said.

Kioni nonetheless argued that the mass exit of Jubilee members does not automatically mean UDA will lead the next government.

“If you go through memory lane in 2007 the Members of Parliament under PNU from Mt. Kenya region were only 29 and 45 in the whole country yet we led the country from 2007 to 2012 including giving this country a different constitution,” Kioni said.