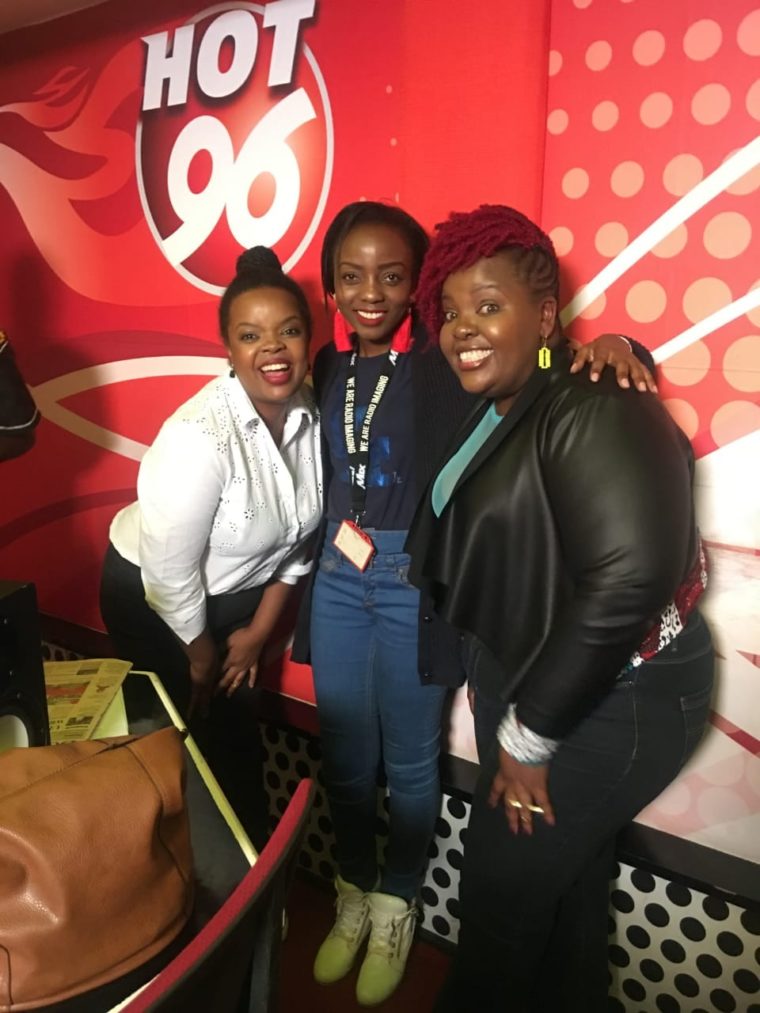 By Patience Nyange and Esther Kiragu This week in the #KenyaWomenSeries, we feature Cynthia Mwangi, a journalist doubling up as a content producer. She is passionate about all things radio and has been at it for more than 10years. She has worked behind the scenes producing great content, being on the mic and managing some of the best talents in the industry at Royal Media Services (RMS). Cynthia is a great believer that human beings are multifaceted. Besides being the Head of Radio at Hot 96, a radio show host and a content producer, she is also a PR consultant and life coach. She recently launched a ‘Living by Design’ template. Oh, and she’s a sweet tooth and thoughtful ‘gifter’, which previously led her to co-found Ythera gifts, an online-based gifts-cum-chocolate confectioneries company that has since morphed into a chocolate club offering exclusive wine and chocolate pairings. 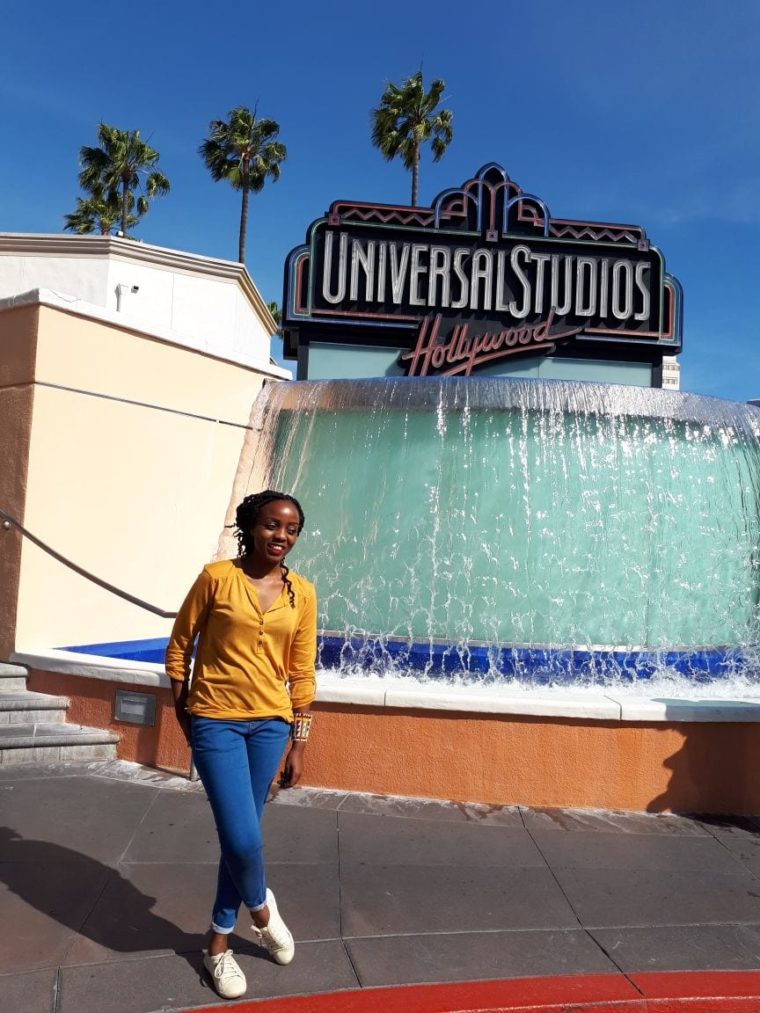 “Like most pioneer media students in many learning institutions, we didn’t have much to go with except theoretical training at the Multimedia University. This led to my six-month internship training at Royal Media Services, Hot 96 being the only station I had wanted to intern at. “I found myself behind the scenes as a producer for a Swahili radio station (Radio Citizen) and a vernacular station (Mulembe FM). At that point I had never been in a production studio, never had I seen a mixer or any of the editing software that was being used. “I hadn’t learnt or experienced anything radio. However, I winged the heck out of it. My mentors Julian Macharia (then Deputy Programs Director) and Simaloi Dajom (then head of Production), were patient with me. In less than two months, I was one of the most promising interns. “To date, working behind the scenes remains such a fulfilling job for me. At one time, as I was heading home, I passed by some Boda Boda guys. They were listening to the news reports from across the country that I had just worked on. It gave me such a satisfying feeling to realise the kind of impact I was making. That incident confirmed that all the work pressure and the long hours make sense in the long run – I was doing all this for them (the listeners). 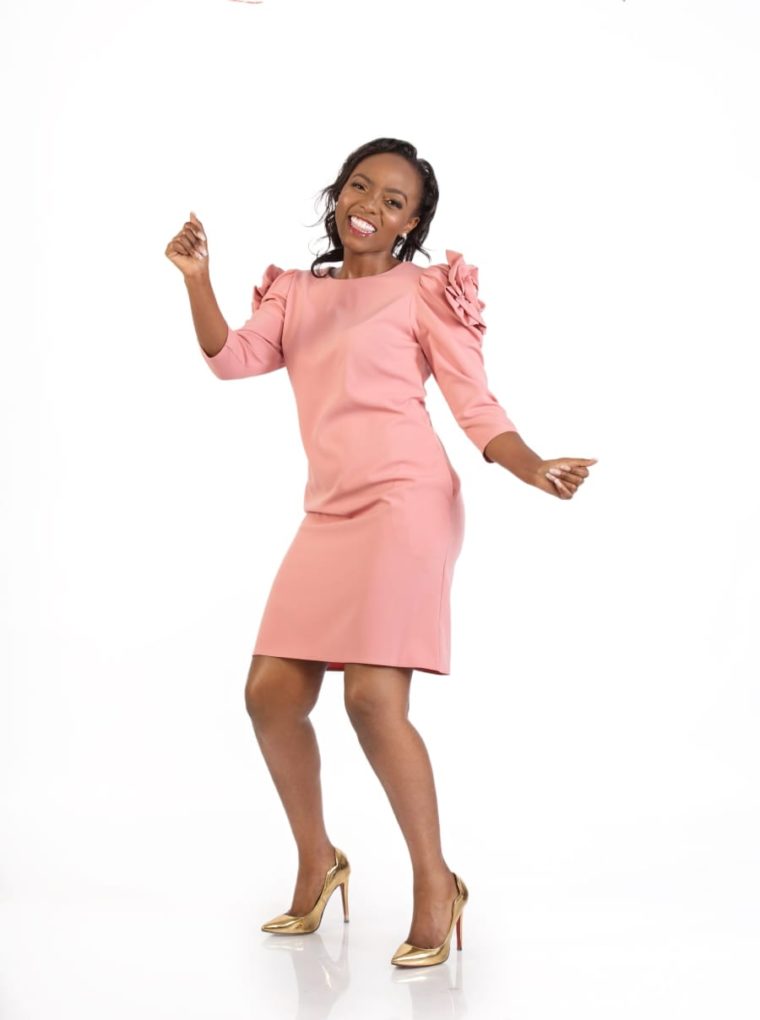 “As a content producer, I have served as part of the best Swahili afternoon shows, Mambo Mseto with Willy M Tuva on Radio Citizen, produced one of the most listened/watched breakfast shows on English radio, Hot Breakfast which was then hosted by Jeff and Jalas. What I love about content production is the ability to bring ideas to life which remains one of my biggest assets and strengths.”

Cynthia’s Career Factsheet:
➢ Head of Hot 96 Radio – I manage Hot 96, one of the 14 radio stations at Royal Media Services.
➢ Audio and Content Producer.
➢ Radio presenter/host – I host the Saturday morning show at Hot 96 – ‘The Morning After’.
➢ I am a PR consultant and a life coach who has launched a Living by Design template, a vision guide on achieving all you were destined to be, besides being a STAUNCH Manchester United Fan.

1. You have worked in the media industry for over a decade now, moving from various capacities within the radio industry and now as the Head of Radio at Hot 96. What makes media your career of choice? 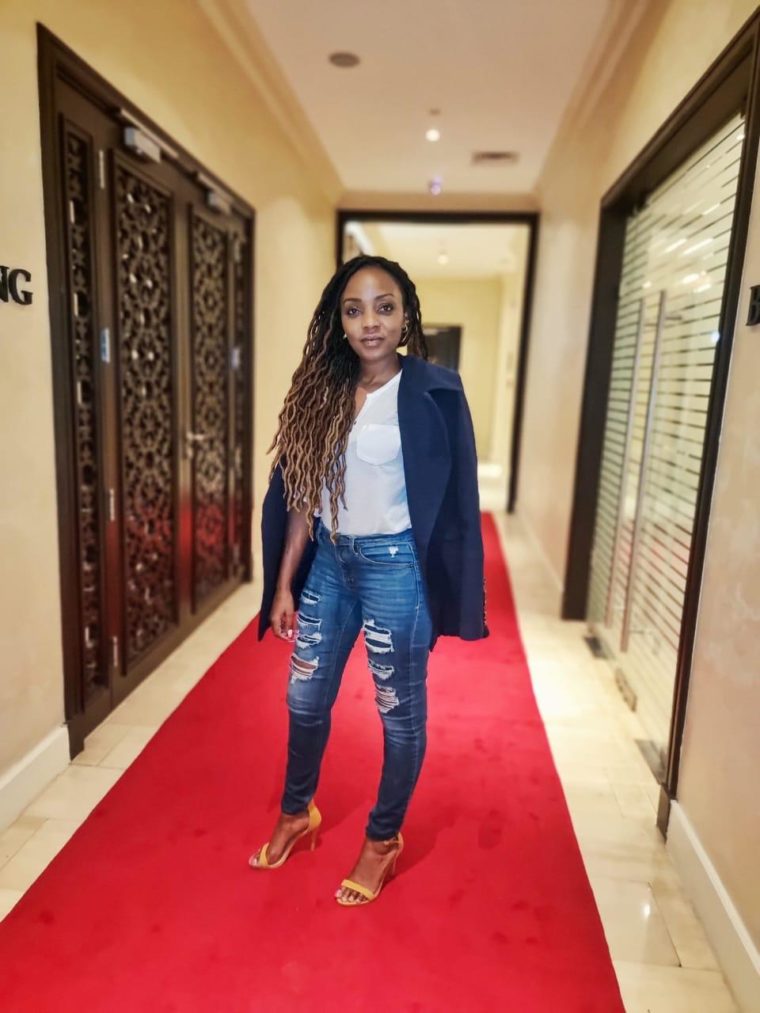 Besides law, media was the only career I was going to venture into. For two reasons:

I. The ability, the opportunity and the platform to speak for the voiceless shape opinions and influence for the people who are either scared to speak up or don’t have the opportunity. With the confidence I have, it made me realise I could use the same to impact the world.
II. I was vocal, opinionated, and an entertainer from a very young age. I have to give credit to my dad for seeing it before we all did: for a long time, he kept calling me ‘Waithera Muitherania’ a veteran radio presenter formerly at Inooro FM. I couldn’t put three sentences together in Kikuyu, but I knew that’s what I was meant to do. Would I have made a good advocate? Maybe. I might just pick it up.

2. What are some of the lessons you have picked along the journey? What do you know now that you wish you knew before moving into your current role? 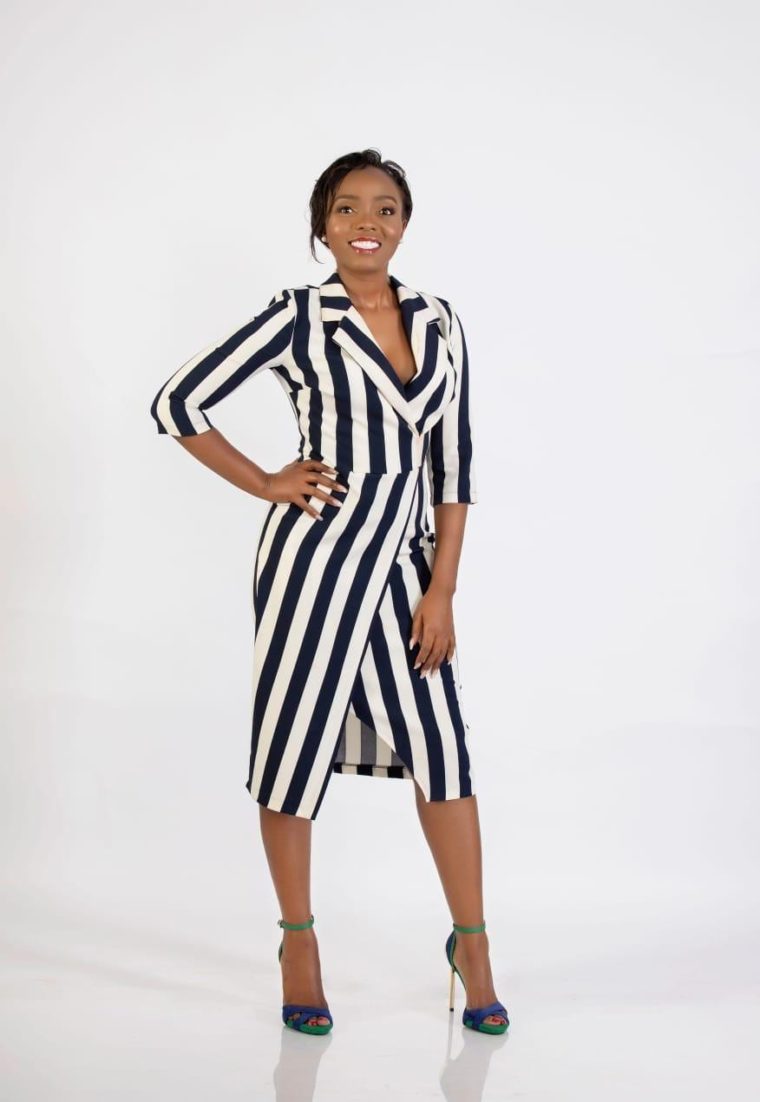 Being a manager can be both challenging and fulfilling in equal measure. People are different, their passions and what drives them are varied. It takes a lot of wisdom and patience to mould and morph the different personalities into a productive and motivated team. The ability to manage a team that delivers and seeing its impact on the community and the people around makes it all worth it. You cannot control all situations, and one has to adjust the sails with the wind. I have worked in different departments with different expectations and deliverables; often, you find curveballs thrust in your way, but you have to learn how and when to swing as they are thrown at you. 3. Given an opportunity to reimagine the media industry, is there is anything you would change? If yes, what will it be and why? Not change but improvement. Media organisations need to adapt and embrace opportunities that will enable the media industry to flourish. The media industry also needs to be agile in taking full advantage of digital spaces and innovations through audience/listenership/ readers data that will shape future decisions of the industry. 4. There are many young female journalists within the media industry. Soon, they will be where you are today. Any tips for younger women media professionals still trying to find themselves within the industry? 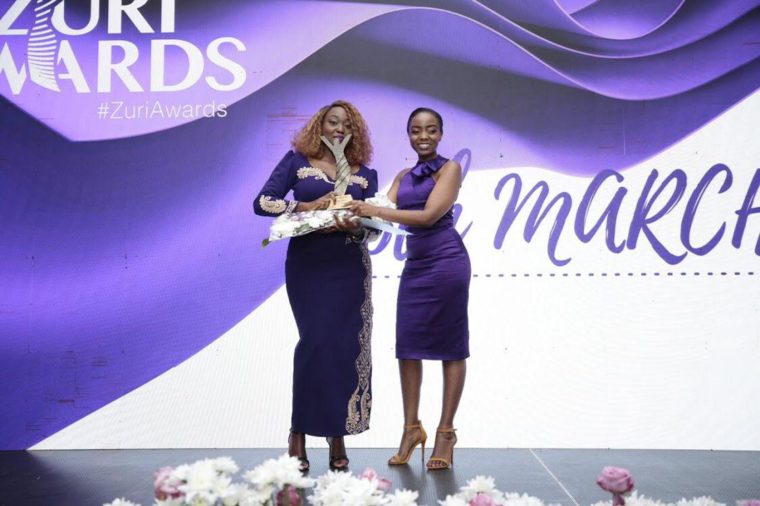 • Learn to look for opportunities in the position you are in: A couple of years ago, when producing the Jeff & Jalas show, a young intern called Dickson approached me. He wasn’t assigned to Hot 96, but he was passionate about camera work and digital growth. He wanted an opportunity to show what he can do. I got him a camera and allowed him access to the studio. He transformed the show into one of the most successful online content the station has ever had. It wasn’t a surprise when he moved to a different media house and is doing quite well.
• Don’t limit yourself to just one role: Try out as many departments as you can. The more multifaceted you are, the more valuable you become. The industry isn’t kind to lazy people. It tends to swallow you and spit you out in minutes.
• Your hard work will pay off, keep working: Both on yourself and with the assignments given. Who would have predicted an intern at Radio Citizen would become the Station Manager at Hot 96? In between there, I produced for five radio stations; worked six days a week, and put in some long hours while at it.

5. Organisational culture and politics affect one’s career development. How have you managed to navigate through it? Any lessons for women? 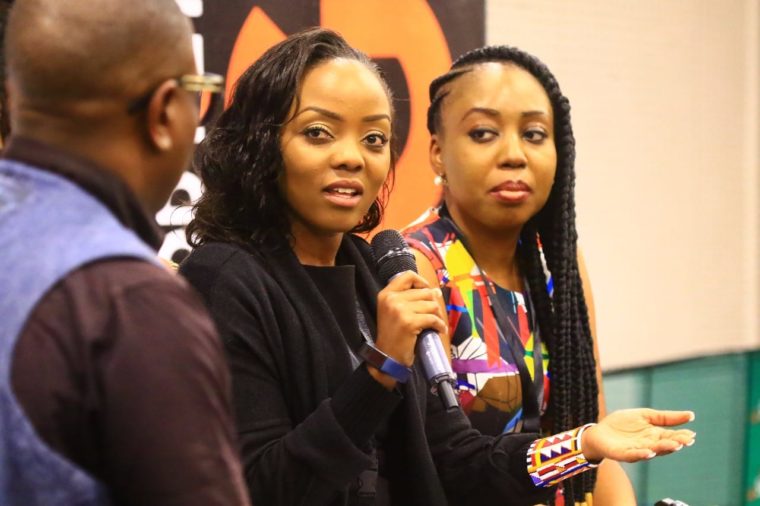 I work in one of the best media houses and biggest at that. Just like any other organisation, it has its culture and politics. I learnt to understand and align myself strategically than just watch as the culture and politics work for me. Don’t shy away from either, but embrace and learn to use them to your advantage. Culture and politics in an organisation will shape who you are and cause a ripple effect on your career, so you might as well use them to propel you in the right direction. Also, learn to use both or either to position yourself strategically. 6. What do you say is the role of media in amplifying women’s space, promoting their inclusion and diversity in the 21st century? Is the media doing enough? If not, what should be done?

Telling their stories, creating spaces/ platforms where these stories can be told and giving women either through leadership opportunities or featuring them are a few of the things media can amplify and include women. More can always be done. Media is making significant strides in showcasing, creating platforms and amplifying the spaces of women in society. The increase in women who are breaking barriers and shattering glass ceilings has also made this easier. More women can now be included in the decision making tables, and their stories and accomplishments featured. 7. If you were to choose the two most important values that shape the way you live and work and keep you grounded, what would they be and why?

• Patience and Resilience: My position has exposed me to learn that when things seem to be whirl winding, I need to pause, take a breather and try to see the situation from another perspective before responding.
• Courage: I have learnt that in life, you just need to keep moving despite the noise around you. It is about having the courage to do what needs to be done, period. 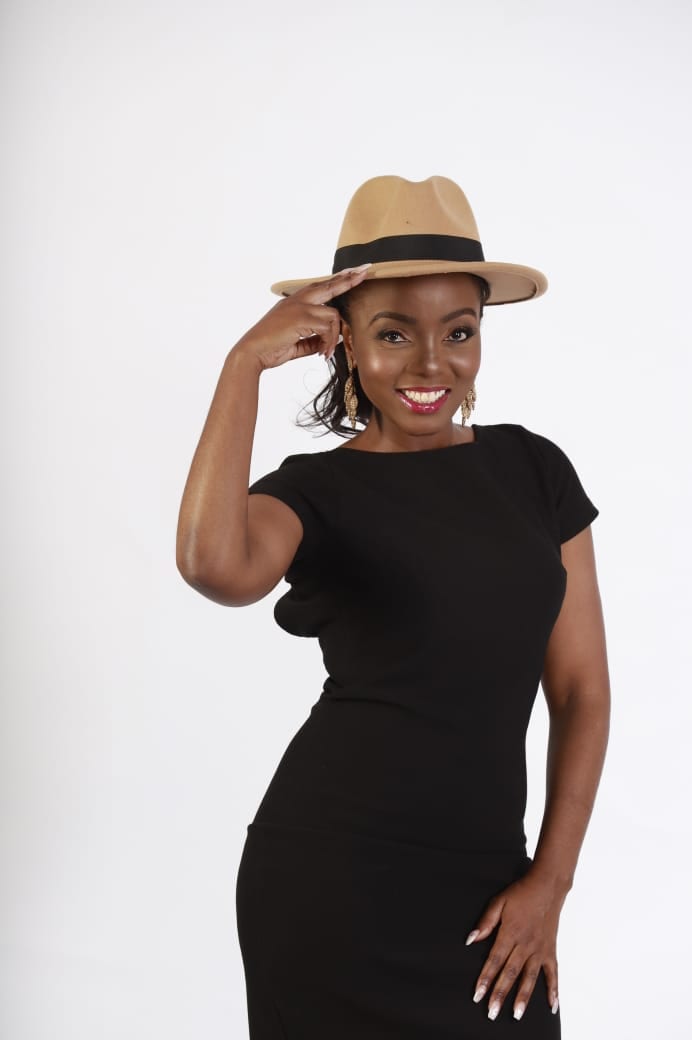 8. As we wind up, how do you describe yourself, and how do others describe you? I tell people I’m an introvert with extrovert streaks. Ambitious, self-driven and brutally honest. I am passionate about what I do, a team player with a penchant to see and experience the world in 6-inch heels. When the beat drops, I’m the first on the dance floor. What others think of me – I am a risk-taker, daring. When I walk into a room, heads turn because of my personality. Loyal, kind and committed to the people that I care about. And hilarious! I kid you not. Any parting short? Enjoy life, take risks, learn, unlearn, experience what life has to offer. This is not a rehearsal, this is it- LIFE. You get to do it only once, so make it memorable. Don’t let people’s opinion of you override yours. Leave a mark in the world, so everyone will know you were here. About the writers: Esther is a writer, editor, and communication professional in Kenya while Patience Nyange is a Chevening Scholar with a Masters Degree in International Public Relations and Global Communication Management from Cardiff University. Prior to joining Cardiff University, Patience served as an Assistant Director at the Kenya National Commission on Human Rights (KNCHR).