'I took a loan of Ksh.1.2M, he still cheated,' and 18 other short character development stories from Kenyan women 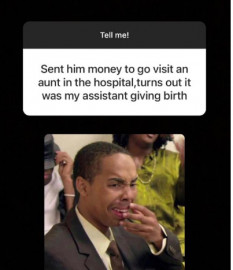 Most people swear they would do anything for love: Romeo and Juliet died for it, Hellen of Troy- the most beautiful woman in the world during her time- caused a 10-year war between Greece and Troy.

But while love is a discreet madness, there is an important line to be drawn, some unnameable boundary for which love isn't even worth crossing.

There is that, and then there are these 18 Kenyan women who have opened up about spending cash on men they though they'd live forever with.

For context, these confessions were shared by BBC's Ciru Muriuki, who asked her followers share all the sleazy stories of how they bank-rolled cheating partners without knowing.

1. Like this sister, who spent a whopping Ksh. 2 million on a man she was head-over-heels in love with..

2. Or this sister who sent her 'man' cash to fuel his car as she queued for the Zuri Genesis matatus to take her to Thika Road.

4. Or this other girl who bought her then man, an aspiring DJ,  deejaying equipment, so he would continue playing her heart.

5. And this woman who bought her man a vintage camera as a gift, only for him to return it when things went belly up.

6. This sister said she bought 'her man' a watch for his graduation as well as fuelling his car. Long tale, but the short of it is that he never even invited her to the party.

At this point, the confessions started to heat up.

7. Some prayers for this babe who claims she bought the love of her life new shoes, you know, to give him that extra pep in his step, but he ended up wearing them to his ruracio with a different woman.

8. Or this woman who spent some Ksh.18,000 on house shopping for a man. They broke up the same month.

9. There is also this woman who went all out to throw her man a birthday party only for him to show up with his actual girlfriend.

9. Wueh. Earth is hard. This woman claims that she paid for a three-day vacation in the Maasai Mara only to be dumped on the last day.

10. This poor girl took a Ksh.1.2 million loan in order to help her man fund a business trip. Apparently, the man  took a trip with his main chick.  The poor girl continues to pay the loan to date.