Can a knife emoji double as a threat to kill someone? Judges struggle to interpret emojis 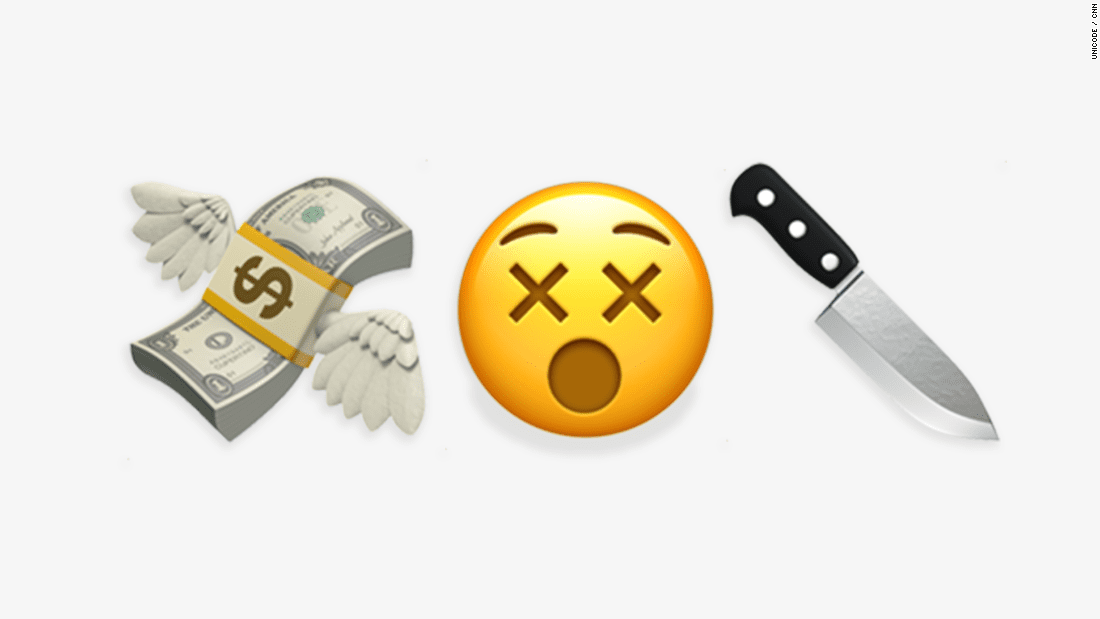 Can a knife emoji double as a threat to kill someone? Does a heart emoji from a manager constitute sexual harassment?

More emojis are showing up in court cases throughout the United States.

Attorneys are having to argue for different interpretations of the small illustrated characters that are used to express emotions, activities or objects.

And courts are struggling to handle the nuances of emojis as evidence.

“Many courts haven’t had to deal with the emoji much, but the numbers are up and it will likely increase,” Vinson & Elkins partner Jason Levine, who has worked on cases with emojis as evidence, told CNN Business.

“Judges aren’t prepared for the influx, especially ones who are older and may not be familiar with newer vernacular.”

The number of reported cases with emojis as evidence in the United States increased from 33 in 2017 to 53 in 2018, and is at nearly 50 so far in the first half of 2019, according to Eric Goldman, a Santa Clara University law professor who monitors court opinions that are made public.

No court guidelines exist on how to approach the topic. Sometimes a judge might describe the emoji in question to jurors, rather than allow them to see and interpret it for themselves.

In some cases, emojis are omitted from evidence altogether, Goldman said.

Emojis are most prevalent in sexual harassment and criminal cases. An emoji with Xs for eyes — also known as the “dizzy face emoji” — was an issue in a 2017 murder case in Massachusetts.

Prosecutors argued that the emoji showed that an individual who received it knew “something was happening.”

Emojis are increasingly showing up in workplace lawsuits, too. For example, in an employee termination case related to a possible violation of family medical leave, a manager sent a series of smiley face emojis. The plantiff’s lawyers claimed it was evidence the company was happy to let her go.

“Someone may use threatening symbols, a gun, a pointed finger, and then behind it put a symbol for ‘just joking,'” said attorney Karen S. Elliott of Eckert Seamans Cherin & Mellott, a firm that has worked on cases with emojis. “There is a lot that could get lost in the translation. Was it a joke? Or was it serious? Or was the person just using the emoji to hedge so that they could later argue it was not serious?”

There are more than 2,823 emojis set by the Unicode Consortium, ranging from food and drink to hand gestures, activities and facial expressions.

Emojis can be especially misinterpreted when used without text, according to ABI Research analyst Stephanie Tomsett. For example, a face with sunglasses could be used to convey a sunny day, feeling cool or “deal with it.” Similarly, the emoji with smoke coming out of the nose could be read as “angry” when it’s intended to mean “triumph.”

“Emojis cannot be considered a universal language,” Tomsett said. That’s especially true when you consider how symbols vary by culture.

The thumbs-up gesture has been up for debate as offensive or vulgar in the Middle East, while it’s a sign of something good in other parts of the world. A smiley face emoji is taken as sarcasm in China.

But one of the biggest points of contention for emojis in court cases is that they render differently on varying platforms, whether you’re using, say, an Apple iPhone or a Samsung Galaxy device.

Although the Unicode Consortium sets the standard for emojis, software makers, such as Apple and Google, then design versions for their platforms, opening up a path for inconsistencies and miscommunication.

For example, the pistol emoji looks like a real gun on some devices and a water or toy gun on others.

In a 2016 study from the University of Minnesota, participants rated popular emoji characters on Android and iOS as positive or negative.

In the case of the emoji called “a grinning face with smiling eyes,” some people interpreted the image as “blissfully happy” on Android, while it looked like it was “ready to fight” on iOS.

Another study found about 25% of participants were unaware the emojis they posted on Twitter could appear differently based on their followers’ devices.

After being shown how one of their tweets rendered across platforms, 20% said they would have edited or not sent the tweet.

“Earlier on, we may have all thought all smiley faces were the same, so it might have seemed OK to the courts for the evidence to come in simply as a smiley face,” attorney Elliott said.

Some experts such as ABI Research’s Tomsett argue there should be consistency across platforms to avoid confusion. But she believes standardized emojis are unlikely because platforms want to “stand out and offer unique experiences.”

However, she believes they could start to look increasingly similar to help alleviate some of these issues.

Attorney Elliott argues courts will need to develop literature that requires lawyers to obtain the exact depiction of what was sent and received on each platform, and show it to the judge and jurors in a case.

“Words may not adequately describe the precise emoji meaning,” she said.

Of course, emojis are commonly used to bring levity to conversations. Courts generally recognize attempts at humor, and defendants have invoked “I was just joking” defenses for centuries.

According to Elliott, the courts and judges are becoming more skeptical about this defense in criminal cases because the recipient doesn’t know whether it’s actually a joke.

“As long as the threat is conveyed, it remains a threat,’ she said. “For example, you can’t yell ‘fire’ in a crowded theater and then say ‘just joking.'”

Some judges omit emojis as evidence because they think it’s superfluous, according to professor Goldman.

He referenced a sex-trafficking case in which an expert witness detailed how a series of sent emojis, including a crown, high heels and bags of money, provided evidence of prostitution, noting a crown often references a pimp.

“We might not think twice about a crown emoji, but in the sex-trafficking world, it added context,” he said. “If a judge said ‘omit emoji’ and … wasn’t briefed by other parties on its meaning … that would make it impossible for any of us to audit … and understand what the court did to independently consider the evidence was irrelevant.”

However, Goldman believes the issue will eventually solve itself as more emojis surface in cases.

“With the proliferation of any new technology, there is an adjustment period for everyone, including judges,” he said. “As judges become more familiar and comfortable with emojis, they will figure out the best ways to adapt existing legal principles to [them].”