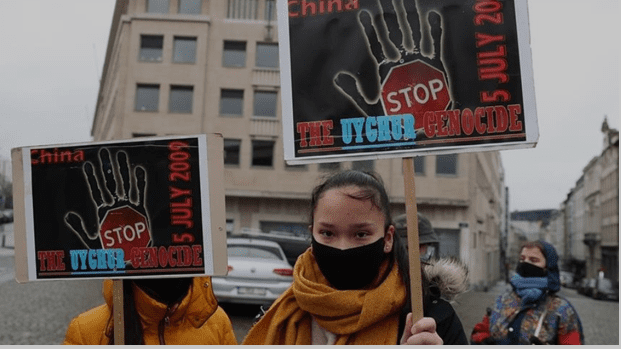 No matter how strongly China attempts to hide the genocide it perpetrated on ethnic minority in Xinjiang province, by even calling it the country’s internal matter, the world has begun raising the issue more actively.

The voice has become stronger in the recent past. And this time opposition voices range from world leaders to legislatures to rights organisation to businesses. On February 25, the Dutch parliament passed a motion calling the treatment of Turkic minority Muslims in Xinjiang, famously know as Uyghur community, in China as genocide.

The motion termed the matter of human rights abuses as grave concerns since they involved “measures intended to prevent births” and “having punishment camps”. A few days ago, Canada too described China’s treatment of its Uyghur minority as a genocide. The move showcases how Canadian legislature intend to take a turn from the country’s earlier position of striking a balance between being critical of China’s hostilities and maintaining cordial relations with Beijing.

Not just Canada but many western countries besides Australia were seen moving away from China in the past one year in the backdrop of Chinese-born coronavirus creating havoc across the world. The allegations of spying by Chinese companies such as Huawei, ZTE also added to the distrust.

However, human rights violations in Tibet, Hong Kong and Xinjiang appear to have been crucial in turning the tide against China. Now even rights organisations are targeting upcoming 2022 Winter Olympics in Beijing to highlight racial abuses across China.

A group of activists and lawyers have named the Beijing Olympics as “Genocide Games” to pressure the sponsors and to drive them to look into the matter. They fear China intend to silence the issue of genocide by using Olympics as a propaganda tool for distraction. Blair McDougall, campaign director of Stop Uyghur Genocide, said “It’s not fair that these huge institutions who can speak out are going to leave it to the individual athletes to do this. The governing bodies could speak out, the sponsors, the IOC.”

In what can be called as an unusual move in the world of businesses, 12 major Japanese companies have decided to end deals with Chinese companies that were engaged in forced labour of Uyghur Muslims.

These companies include tech giants such as Toshiba, Sony. Also, the US- based companies have cancelled the orders of cotton from China as protest against the human rights violations in Xinjiang. It has fractured the Chinese industry. Chinese cotton yarn maker Huafu Fashion said in a Shenzhen stock exchange filing that it incurred losses of USD 54.3 million in 2020 as against the net profit of USD 62.5 million in 2019.

Tursunay Ziawudun, one of the survivors of genocide in Xinjiang, said Beijing government has resorted to sexual violence to oppress Uyghur people. She said “Chinese men would come in masks and suits and select a bunch of women and rape them in a ‘black room’”. Ziawudun too was tortured and gangraped on three occasions by two or three men.

Ziawudun managed to flee and reached the US through Kazakhstan. Uyghur rights activists Rushan Abbas has appealed celebrities to raise their voices against the genocidal crimes perpetrated on Uyghur Muslims by the Jinping government.“Please use your voice and the responsibility of your celebrity to refuse to bow to China’s blood money and its attempts to silence the world on its crimes against the very soul of humanity. The future of women, and the freedoms we cherish, are at stake,” she said.

Horrified by the intensity and severity of harassment, now the Holocaust survivors have urged British Prime Minister Boris Johnson to denounce the Uyghur genocide.

“Any considerable person cannot ignore that the Uyghurs in Xinjiang and other groups are facing genocide. We are watching on as one of the most egregious crimes is unfolding before our eyes,” said Holocaust survivors Ruth Barnett and Dorit Oliver Wolff. Meanwhile, Canadian Leader Erin O’Toole has demanded relocation of Beijing Olympics due to China’s ‘genocide’ of Uighurs.

Human Rights Watch (HRW) has found that 60 percent of the total people arrested in Xinjiang were convicted and imprisoned without committing a genuine offense. “Despite the veneer of legality, many of those in Xinjiang’s prisons are ordinary people who were convicted for going about their lives and practicing their religion,” said Maya Wang, senior China researcher at the HRW.

In his first call the Chinese President Xi Jinping since he become US President, Joe Biden raised the issue of genocide in Xinjiang, giving clear signal that America would keep pursuing it seriously. The action taken by the US generally has great influence on other countries. Thus, the firm stand taken by Biden means the pressure would be kept mounting on China for its active role in racial discrimination and abuses.

Juan Carlos commentates on matters International Affairs. He is an international affairs/geo-politics analyst