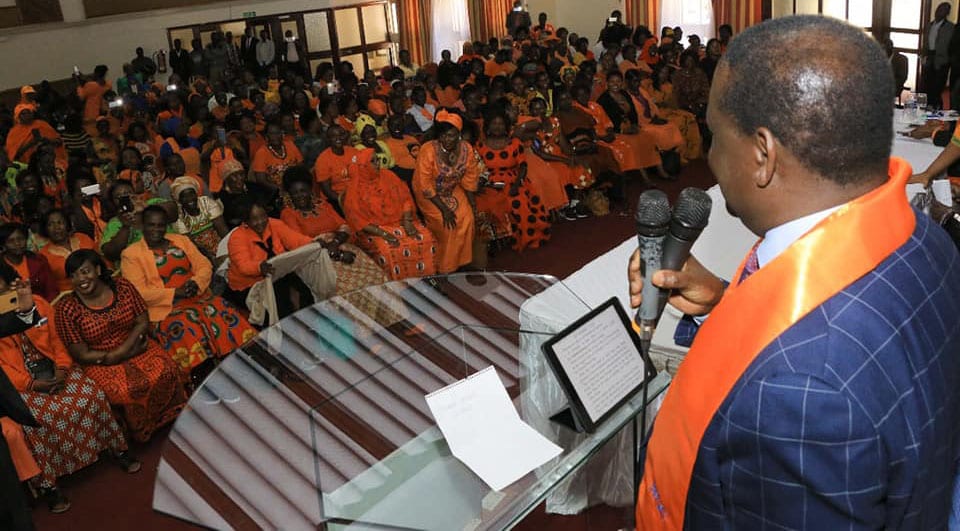 Women are makers and builders of nations. In Germany to date, there is a group called the Trümmerfrauen, the rubble women.

These women are the ones who set about clearing up the ragged ruins of Germany’s cities at the end of the Second World War.

Often they were alone as their men were dead, prisoners of war or maimed in the Second World War.

They cleaned the streets, collected buckets of broken bricks that had been brought down by the war and piled them to be used in building new homes and office blocs.

African women did the same in Liberia and Sierra Leone after the devastating wars in those countries. That is why I say; women are builders and makers of nations.

I am therefore happy that Orange women have assembled here to deliberate how to rebuild both our party and our country.

Kenya is on the rebuild mode. I am therefore happy that among the issues you have picked to discuss is the Building Bridges Initiative popularly known as the handshake and the war on corruption, which you have indicted you fully support.

I welcome wholeheartedly your decision to strengthen the party in Nairobi. A strong presence in Nairobi will send strong signals to the grassroots for our supporters there to equally reorganise and rebuild.

As I have had occasion to mention to some of you before, Kenya changed on the 9th of March 2018 when President Uhuru Kenyatta and I put our differences aside and shook hands.

On that day, we shifted attention from the wars we have fought and the differences that have kept us apart and focused on building Kenya from scratch.

We decided to confront the issue of tribalism, lack of values, the exclusion, chaotic elections and corruption in Kenya. We agreed to tackle the question of shared prosperity and safety and security of our citizens.

When the little resources we have, some of it borrowed to be used in building roads, schools, hospitals and grow food end up being stolen, we suffer as a nation, and women suffer more.

The truth is, many times, it is the mothers who are there when children are crying for food, when the baby is sick and needs to be rushed to hospital when the small boy or girl cant go to school because they have no pen or exercise book.

Corruption is the reason taxes are going up leaving many families unable to put food on the table, take their members to hospital or provide them with basics.

As you all recall, we had a difficult time in 2016 and 2017 as cost of unga went up before unga disappeared from stores.

It was all about corruption. Farmers were paid too late because officials at NCPB were busy stealing money meant to buy fertilisers and to pay farmers.

They also used the money to pay fake farmers while genuine ones languished in poverty. Officers allowed maize to come in from Uganda while our farmers were stuck with their produce.

Corruption at KPLC consigned Kenyans to extremely high electricity bills and forced some companies to shut down and move to Tanzania, taking away jobs that our children need.

We are lifting and freeing our women when we declare war on corruption. And indeed, we have declared that war.

As you support the handshake as you have said you do, you must know that your enemies, the enemies of Kenya, are the corrupt people who take what is mean for the nation and use them for their own individual good and their families.

Such people must be named and shamed. They must be made to return what they stole.

We are trying to reboot project Kenya and we are trying to interrogate our political culture and to rethink the way the Kenyan political system is structured so that we ensure it does not make it too hard for too many of our population to progress.

We know it is harder for women than men to progress in Kenya’s politics and economy. We are interrogating why this is so and what needs to be done.

We are trying to interrogate why our elections turn into civil wars in which people have to die and businesses have to be shut down unlike in our brother countries on the continent such as Ghana and South Africa where elections are simple events that do not tear apart communities and families, threaten lives and trigger economic stagnation.

Strong parties can be dependable allies of the State in the effort to address these challenges. Even more critical is the involvement of women in articulating these issues.

Which is why I deeply appreciate that you are strengthening the women wing of the party within the framework of the “handshake.”

As a party, we have always advocated unity of the nation through equitable sharing of power and resources.

Kenyan women have always been pioneers and go-getters throughout our history. Now, as we reboot Project Kenya and restart our nation, I want our women to reinvent their zeal and be part of the trend around the world.

That trend is that as nations stare at uncertainty, more women step in and seek leadership hoping to steady their nations or just to register their displeasure at the state of affairs.

Reports indicate that in the US currently, there is an unprecedented surge of first-time female candidates running for offices big and small, from the U.S. Senate and state legislatures to local school boards. At least 79 women in the US are exploring runs for governor in 2018.

The number of Democratic women likely to challenge incumbents in the U.S. House of Representatives is up nearly 350 per cent.

Last year, Britain elected more women to parliament than at any time in the country’s history.

As the country struggled with the uncertainties of Brexit and what that meant, at least 207 female lawmakers were elected to the House of Commons, giving the slightly more than 30 per cent of the legislative body.

Kenyan women must be part of this build up. As I said during this year’s Devolution Conference in Kakamega, we began with zero women governors in 2013.

In 2017, we ended up with three women governors. We need to have as many as half of our counties governed by women.

It is a tough call, but we must make a start. Nelson Mandela said “it is always impossible until it is done.” I encourage you to soldier on and I assure you of my full support.

I also encourage you to have faith that the Building Bridges Initiative carries hopes for the progress of our women.