LINUS KAIKAI’S KICKER: To re-imagine Kenya, Uhuru must walk away from bad advice 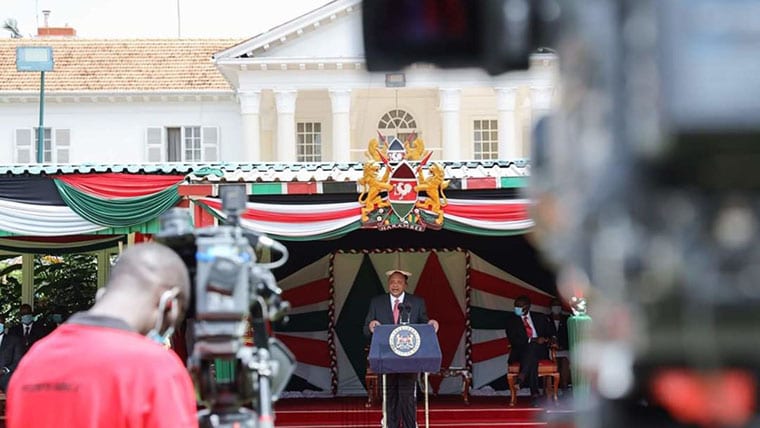 On my Thursday kicker, I revisit President Uhuru Kenyatta’s Madaraka day speech, and revisit I shall, pun intended.

A short ten days ago, President Kenyatta invoked names of the country’s independence leaders, called them founders of the nation, acknowledging them as such by name, some of them I believe for the first time ever by any administration since independence.

Then the President pitched his case for what he called ‘re-imagining Kenya’; specifically its dream and nationhood. In paragraph 18 of the speech, the President posed a question: ‘How did the original blueprint of project Kenya look like?’

He then asked Kenyans to make a historical inquiry in response to this, and other questions raised in his speech. The President then referred to the adoption by the founding fathers of the sessional paper number 10 of 1965: an economic vision document titled ‘African socialism and its application to planning in Kenya’.

Though attributed to Economic Planning Minister Tom Mboya and his Assistant Minister Mwai Kibaki, Sessional Paper no.10 was first drafted by an American expatriate deployed as an advisor to the Government of Kenya.

But on making a historical inquiry, one will find that by 1965, a mere two years after independence, the founding fathers were already falling out and the dream was coming apart.

Sessional Paper no. 10 was an ideological victory paper for the conservative wing of the founding fathers and was launched exactly two months and three days after the assassination of Pio Gama Pinto, the main brain trust of the liberal wing of the founding fathers, and who, historical accounts claim was preparing an alternate, more African and more socialist sessional paper for submission to parliament.

Other than Pinto’s death, 1965 and going all the way to 1969 is brimming with illustrations of a horrendously imperfect start to our nationhood, a dream resting on the cusp of a nightmare. To re-imagine Kenya, therefore, that imperfect start must be confronted.

The country must be set on the path towards the kenyan equivalent of what americans call ‘a more perfect union.’ As a second term president, President Kenyatta should be well placed to lead the country through the first steps down this path.

But that responsibility carries with it some silent conditions. Let me voice just two: first, the President’s own intentions must be sincere and selfless and they must be seen to be so. His intentions must be incapable of inviting doubts or suspicion.

Secondly, the President must be able, willing and strong enough to walk away from bad advice. And without a doubt, there is plenty of bad advice around him.

The ongoing row with Chief Justice David Maraga is only the latest illustration that there is no shortage of bad advice around the President. And bad advice, especially one clothed politically with that false sense of invincibility, can be audacious, daring and bold.

How else can the narrative be told of an Attorney General that is a member of and sits in the Judicial Service Commission, participates in the interviews and selection of judges then turns around to advise the president against the same appointments, he the Attorney General was part of?

Bad advice aside, the President should not have the slightest doubt that he will be judged by some Kenyans entirely on the row with the Chief Justice which many believe stems from his angry promise to revisit the Judiciary after the nullification by the Supreme Court of the apparently dubious results of the August 8, 2017 presidential election.

A whole three years later and aggrieved as he may be, it is the President’s turn to accept and move on. In paragraph 15 of his Madaraka Day speech 10 days ago, the President said: “If we repeatedly feed our national psyche with negative energy, we become a nation of angry people..”

Now, negative energy on the psyche of the nation is what we are witnessing in the feud between the Executive arm of the Government and the Judiciary. The President must lead the way by ending his feud with the chief justice and formally bringing to a close that famous chapter he titled ‘we shall revisit’.

Only then can the President take on the task of re-imagining Kenya; without the burden of anger and vengeance, and without inviting doubts and suspicions about his real intentions on the constitutional reforms he is now championing.

In paragraph 30 of his Madaraka Day speech, President Kenyatta spoke of the place of the ‘right mindset’ in the process of imagining and building a nation.

In paragraph 32 he spoke of faith and intentions, quoting what he termed the deep teachings and convictions of the founding fathers. Because of the right mindset and because of intentions; it becomes pertinent that President Kenyatta takes another look at his advisors if this re-imagination and constitutional moment thing is to be realized.

If advisors can mislead the president on the constitutional spaces of the arms of Government, particularly the Judiciary, then you can only imagine where such advisors can take the President’s imagination in re-imagining the Kenyan dream.

Bad advice is capable of taking the President back to 1965 and the current events in the Houses of Parliament today, are not particularly flattering. And so as he re-imagines the Kenyan dream, the President must be mindful of the mindset and intentions of those that inform his perspectives.

From out here, let him stand advised that bad advice did not only waste his entire first term but also delayed his second term by a whole three years. Bad advice can cost President Kenyatta the remaining two years of his term and the last chance of a legacy.

And the harsh judgment of history will not be on the bad advisors, but on the President himself.

That is my kicker.