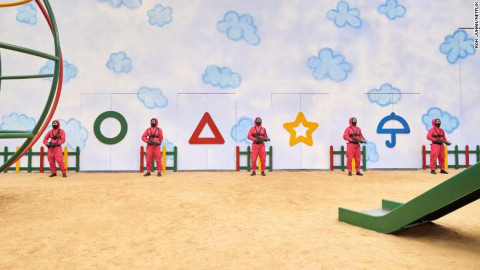 As fascination with Netflix's "Squid Game" grips the world, doctors have a word of advice for parents: Don't let your kids watch.

"Squid Game," which debuted on Netflix in September, is a South Korean fictional drama following contestants, who are deeply in debt, as they play a series of children's games in an attempt to win money. But, if contestants lose, they're killed off -- and the show doesn't shy away from the gore and violence.

And yet, "Squid Game" has amassed a huge following, with Netflix reporting that 111 million accounts had watched the anti-capitalist drama in within less than a month since its debut, calling the show its "biggest-ever series at launch." Halloween costumes inspired by the show are also topping internet searches, while viral challenges inspired by the show can be found on TikTok.

On Netflix, the show has a rating of TV-MA, meaning it may not be suitable for teenagers under 17. And yet the show has found its way to those far younger, drawing concerns from doctors.

Doctors at the Child Mind Institute -- a nonprofit dedicated to children's mental health -- recommend that no one should watch "Squid Game" until at least late adolescence, regardless of whether parents are watching with them.

"The level of violence is horrifying — more than most shows," said David Anderson, head of School and Community Programs at the Child Mind Institute, in a statement. "It's a murder fest with the premise that out of over 400 participants, there can only be one survivor."

Common Sense Media, which rates shows and movies based on age appropriateness, called the violence in the show "very intense."

"Characters are systematically tortured and killed for the sadistic pleasure of a game master. Adults have sex, and there are threats of sexual violence: Women are grabbed by the hair and beaten," the website notes. "Themes concerning the highs one gets from gambling, winning, or conning money are a main focus."

In some cases, schools have taken action against the show and its games.

A private school in Roswell, Georgia, banned any discussion of the show and the games from it, according to CNN affiliate WGCL.

Similar moves have been made internationally, as well.

In England, for example, the education safeguarding team from the Central Bedfordshire council recommended parents not allow their children to watch the show following reports that kids were copying the games from the show, according to The Guardian.