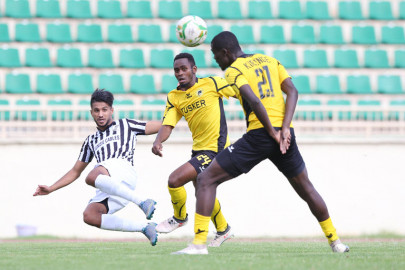 Kenya’s representatives in the CAF Confederation Cup Tusker FC and Gor Mahia will have to fight harder to keep their hopes of qualifying for the group stage of the continental championship, after drawing and losing their first leg matches in Nairobi and Brazzaville respectively on Sunday.

Tusker were held to a barren draw by visitors CS Sfaxien as Gor went down 1-0 to AS Otoho d’Oyo, courtesy of Okouri Roland’s goal in the 63rd minute.

The brewers thus have a difficult away match to Tunisia on December 5, where they will have to avoid defeat to progress while  K’Ogalo will need to win by at least two goals in Nairobi to advance.

In Nairobi, Tusker had the chances to score especially in the early stages of the first half, but were too blunt to break Sfaxien’s defense.

At the quarter hour-mark, midfielder Jackson Macharia thought he had given Tusker the opener had after connecting Daniel Sakari's throw, but the referee cancelled it citing a handball in the buildup.

According to head coach Robert Matano, the referee denied them a clean goal.

Tusker FC's Jackson Macharia in action during the final round of CAF Confederation Cup play-off round at the Nyayo National Stadium on November 28, 2021. Photo/ Kelly Ayodi/ Sportpicha

“Why do you say we made attempts and failed to no score? Didn’t you see we scored only for the referee to deny us? We also showed more composure than we did against Zamalek in the CAF Champions League preliminaries second round. We are therefore not relenting, we go to prepare targeting a win in Tunisia,” a confident Matano said.

Sfaxien who employed a defensive approach from the start made their first real attempt when Aymen Harzi lost his markers Clyde Senaji and Eugine Asike but keeper Brian Bwire did well to stops his shot.

Both Ibrahim Joshua and Boniface Muchiri missed narrowly as Tusker pushed harder towards half-hour mark, the former’s header from Daniel Sakari’s cross flying inches off target. Muchiri’s low drive could also not be guided between the posts with the keeper off the path of the ball.

But it was Sfaxien who waste the clearest opportunity of the match, when Harzi leapt away from Hillary Wandera on the right, dazzled past past Bwire in goal but Kalos Kirenge made a clever block to deflect the shot at goal before captain Asike cleared the danger.

Tusker FC's Shami Kibwana reacts after his teammate Hillary Wandera was injured during the final round of CAF Confederation Cup play-off round at the Nyayo National Stadium on November 28, 2021. Photo/ Kelly Ayodi/ Sportpicha

But despite escaping the scare, it was a huge loss to Tusker as Wandera seriously damaged his hand on the elbow as he awkwardly landed on the ground as he tackled Harzi.

Efforts by doctors from both Sfaxien and Tusker took around seven minutes before he was stretchered off and immediately taken to hospital, Kevin Monyi taking his place just beforev half-time.

Monyi would immediately switch with Sakari, going to the right-back position while the former Kariobangi Sharks defender took up the left-back role.

Tusker were determined to keep the mojo they showed in the opening half after resumption but Sfaxien grew more into the game and to evenly balance the proceedings.

Not even substitutes John Njuguna, Teddy Osok and Deogratious Ojok could change the score sheet, as it was to the Tunisians who at the final whistle, evidently showed a sigh of relief to have registered a draw in Nairobi.

At least a win or a scoring draw will be enough for Tusker to cruise into the group stage of the Confederation Cup, a milestone never achieved before by the Ruaraka based brewers.