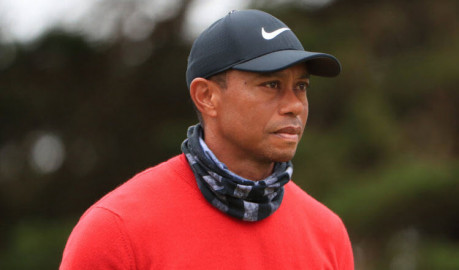 Tiger Woods does not expect to return to golf fulltime

Tiger Woods says he does not expect to return to the tour full time following his car accident in February.

The 15-time major champion had surgery on open fractures to his lower right leg and sustained further injuries to his foot and ankle.

Earlier this month Woods, 45, said he was "making progress" and shared footage of him playing golf for the first time since the accident.

But he said "getting all the way to the top" is not a realistic expectation.

"Pick and choose a few events a year and you play around that. That's how I'm going to have to play it from now on," he told Golf Digest.

"It's an unfortunate reality, but it's my reality. And I understand it, and I accept it."

Woods' car left the road at about 85mph and flipped several times during the accident in California.

The former world number one was the sole occupant in the vehicle and was wearing his seatbelt, with the Los Angeles Sheriff's Department saying he was "fortunate to be alive" following the incident on 23 February.

"I'm not even at the halfway point. I have so much more muscle development and nerve development that I have to do in my leg.

"There was a point in time when, I wouldn't say it was 50-50, but it was near there if I was going to walk out of that hospital with one leg."

Woods has not played since December 2020 when he partnered his son in an event at the PNC Championship.

In 2019 he recovered from spinal fusion surgery two years before, and a string of further injuries, to win a 15th major at the Masters.

He had a fifth back surgery shortly before his car accident.

"After my back fusion, I had to climb Mount Everest one more time," Woods said. "I had to do it, and I did.

"This time around, I don't think I'll have the body to climb Mount Everest and that's OK.

"I can still participate in the game of golf. If my leg gets OK, I can still click off a tournament here or there.

"But as far as climbing the mountain again and getting all the way to the top, I don't think that's a realistic expectation of me."