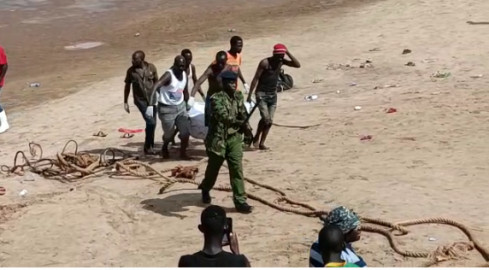 The school bus which plunged into River Enziu, Kitui County on December 4, 2021.

Two more bodies have been retrieved from the swollen  River Enziu in Mwingi, bringing the death-toll from the bus accident to 26.

The bodies retrieved on Sunday afternoon were those of a middle-aged man and a toddler.

Efforts to retrieve the bodies of passengers still stuck in the bus which plunged into the river on Saturday entered the second day on Sunday.

The exercise was particularly made tedious by the strong currents and the position of the bus which local divers say lay on its side, three meters below the surface as of Sunday morning.

“When we returned to resume our operations this morning, we found that the bus had overturned sideways. I was diving hoping to land on the roof but instead went through a window into the bus,” a local diver attached to the Kitui County Government told Citizen Digital on Sunday.

“It will require extra vigilance for us because of the broken window pieces I have encountered there.”

According to the diver, the capsizing of the bus meant they are now battling three feet of running water before reaching the top of the bus, much deeper than when it was upright yesterday.

Some of the passengers who had fastened their safety belts are said to be stuck inside.

At least 26 people have been confirmed dead in the accident, among them four children.

The bus belonging to St. Joseph Seminary School in Mwingi is said to have been headed to Nuu from Mwingi ferrying church choir members to a wedding function.

Confirming the incident, Mwingi East OCPD Joseph Yakan revealed that the school bus had approximately 50 passengers on board at the time of the incident.