Police say no public threat in stand-off at UN headquarters 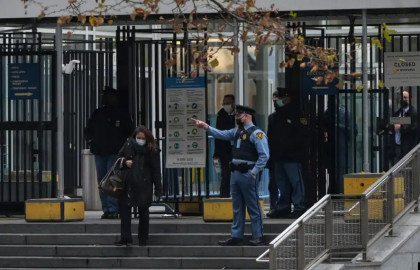 New York police on Thursday cordoned off roads outside the United Nations headquarters, but said a man holding a shotgun outside the venue posed no threat to the public.

According to a UN official speaking on condition of anonymity, the man had threatened to kill himself in front of one of the building's main entrances.

Images showed armed police surrounding the man as he walked up and down the sidewalk holding the gun.

"The incident at 42nd Street and 1st Avenue in Manhattan is ongoing at this time," New York police said on Twitter. "There is currently no threat to the public."

The United Nations told staff the area was secured by the police and that "no UN staff or associates are in danger."

It said police were negotiating with the man, who it said was armed with a shotgun, and added that other venue entrances were operating as normal.