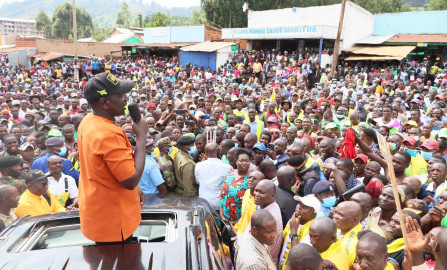 Deputy President William Ruto has vowed to settle the debts promised by the ruling Jubilee Party government if he ascends to power in the 2022 General Elections.

DP Ruto was speaking to residents of Kitutu Chache South in Kisii County on Wednesday where he pitched camp for his hustler movement campaigns.

The DP vowed that his government would prioritize settling promises made by the Jubilee party in 2013 and 2017 in their Big Four Agenda but that were unfulfilled.

The DP further explained how he would incorporate the Big Four in his bottom-up economic model to ensure that the said promise is fulfilled.