MMUST down Homeboyz in Kenya Cup to maintain bright start 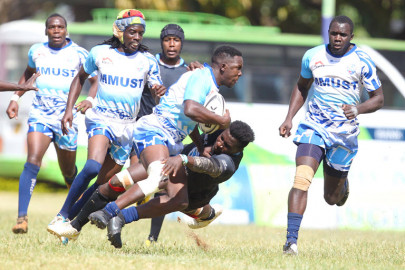 Masinde Muliro University (MMUST) clinched their second victory in as many Kenya Cup matches this season as they edged Homeboyz RFC 22-17 at the MMUST Grounds on Saturday.

The Kakamega-based outfit scored three tries converting two plus a penalty against Homeboyz’ three tries, two of which were converted.

MMUST had opened their campaign with a 24-15 victory over Nondescripts last Saturday while the visitors went down 18-10 to champions KCB.

The hosts got off to a positive start when Nelson Makokha crossed over the line after a successful scrum with Nobert Lumbwani missing the conversion.

That put them 5-0 up and Homeboyz levelled matters quickly through Brian Ratila who won possession, went on a run and got the score at the end of it. Amos Wamalwa missed the extras.

Lumbwani ensured MMUST took the half time lead with a penalty to make it 8-5. They came off the breather stronger, pulling away for 15-8 thanks to some lovely combination play from Jadan Abdon and Elvis Amunya.

MMUST continued dominating the match Felix Wamocho picking the ball from a maul to score their third try Byron Ogada converting to make it 22-5.

Homeboyz picked themselve in the last minutes of the match scoring two quick tries through Joseph Amalemba and Dan Kagwa, Ratila converting one to make the final score 22-18.