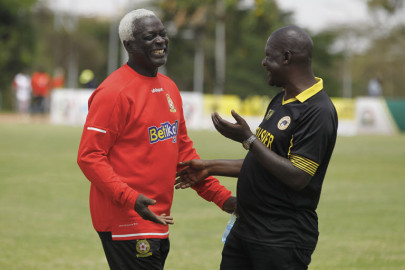 Kenya Police FC head coach John Bobby Ogola says the team’s momentum has been affected by the league close to one month’s break.

The caretaker committee, put in place by the Sports CS Amb. Amina Mohammed, suspended the league for two weeks immediately after the international break, following disbandment of the Football Kenya Federation.

“It has affected our rhythm big time because we lack competitive matches to test ourselves against the best but we have used the period to blend the team well and we will be hoping for a better performance in the coming game,” said Ogola.

Having made major signings during the transfer window, the veteran coach who is also in the Amina’s caretaker committee acknowledges they are under pressure to justify their spending.

“The pressure is there to deliver especially after making to signings we are hoping for  to come back  better by winning the crucial matches ahead of us we the united is there and the focus is to deliver good results  that will make our fans proud,” added Ogola.

Police are set to take on Sofapaka on Saturday as the league resumes, with Ogola admitting the 2009 champions will be difficult to crack.

“They are a good taste for our team, they have experienced players who can hurt any opposition on any given day. We are aware of that and our task is to prepare well with the target of getting maximum points on Saturday,” Ogola told Citizen Digital.