Verstappen, Hamilton play it cool ahead of crunch time 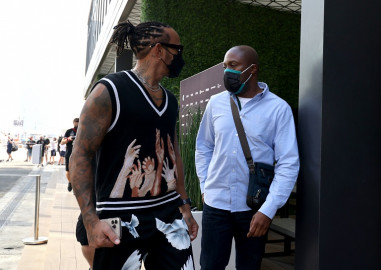 Max Verstappen cut an unfazed figure on Thursday heading into the inaugural Saudi Arabian Grand Prix, a race which could bring the Red Bull driver a maiden Formula One world title.

Verstappen leads Mercedes rival Lewis Hamilton by eight points in the standings heading into the season's penultimate race around the Red Sea city of Jeddah.

The 24-year-old Dutchman, who burst onto the scene as a 17-year-old prodigy in 2015, needs to finish at least second and for other results to go his way to clinch his long-awaited maiden title with a race to spare.

But you wouldn't know it.

"Like I’ve done the whole season," Verstappen told reporters in deadpan style when asked how he was approaching the Saudi Arabian race.

"I’ve always been very neutral, not read positive, negative things or in general not read too many things and be busy with other things in life. "I think that helps a lot," he added.

Hamilton, gunning for a hat-trick of victories with the momentum having swung his way after resounding wins in Qatar and Brazil, looked similarly relaxed.

The 36-year-old seven-times world champion has experienced five down-to-the-wire title battles but is also exploring uncharted territory in his search for an unprecedented eighth world crown, which he acknowledged would count as his most meaningful.

"It’s different in one sense because we’ve got two incredibly close teams, it’s different because we’re fighting for uncharted territory, no one’s ever won eight titles, team or driver, so that’s quite fresh and new," said Hamilton, who will leave Saudi Arabia level on points with Verstappen to set up a winner takes all Abu Dhabi finale if he wins with the fastest lap ahead of the Dutchman.

"Then on the other side I’m more relaxed than I’ve ever been. I remember how it was my first championship and even my second and third, the sleepless nights and all those sorts of things.

"Obviously, (I'm) a lot more sure about myself and just applied myself better than ever before. All I can do is prepare the best I can for what’s up ahead of me and I 100 per cent know I have."