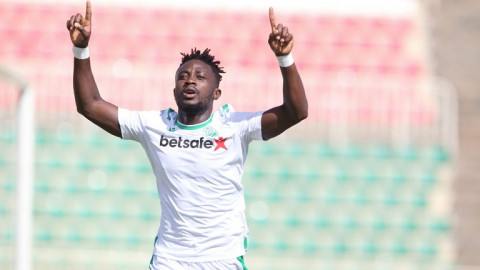 Gor Mahia FC can breathe a sigh of relief after two players who were detained in Brazzaville, Congo over positive Covid-19 tests were cleared to travel.

Striker Jules Ulimwengu and midfielder John Ochieng’ remained in Congo and were set to face an eight-day quarantine that would see them miss a Gor’s crunch game against AS Otoho d’Oyo.

But the duo has been cleared to return home before finishing their quarantine period following mediation efforts from the club and are expected to arrive tomorrow morning at 1am.

They will join the rest of the squad for training tomorrow ahead of the clash, providing a huge boost for Gor who only had 13 players available for the CAF Confederation Cup clash.

“We are happy to announce that our two players who remained behind in Congo over alleged positive Covid-19 results have been cleared and are on their way back. They should be landing in Nairobi shortly after midnight and that means, we will have them around for Sunday’s match,” Rachier told Citizen Digital.

The Kenyans trail 1-0 and will look to overturn the tie on Sunday at the Nyayo National Stadium in Nairobi.