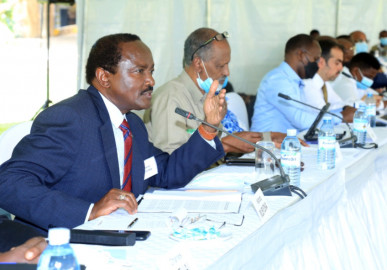 Kalonzo, while addressing the meeting, said South Sudan, Ethiopia and Sudan play a critical role in the East African Community and the IGAD.

He also called upon the East African community to consider throwing its weight in the peace process as a region.

He urged the international community to reconsider its approach to financing projects in South Sudan, imploring upon them to provide the necessary financing for the unification of the army for the sake of expediting the revitalized agreement to South Sudan.

“You can’t imagine a country with two Commander-in-Chiefs, this is unheard of, we must work on unifying these groups including the militias for a better South Sudan,” said Kalonzo.

The special envoy reiterated the need for cohesiveness in nation building citing the Kenyan example of the handshake that has been a significant tool in fostering inclusivity and economic prosperity.

He called upon the international community to consider lifting the sanctions regime to allow the security forces of South Sudan to be better equipped ahead of the nation's first general election which is to take place in 2023.

Kalonzo also applauded the parties to the peace process on their resolve to have the Transitional National Legislative Assembly (TNLA) reconstituted which he said should now breathe life into vital pieces of legislation necessary in expediting the peace process.

“The Constitutional Amendment Bill no.8 and the Permanent Constitution-Making Process Bill 2021 once enacted, will bring into focus the form, shape and character of the constitution and pave the way for general elections,” Kalonzo said.

“I wish to assure South Sudan of Kenya’s unwavering support to the peace process. Kenya and the region stand to gain enormously from the dividends of peace in South Sudan. We are thus committed to ensuring that the Revitalized Peace Agreement is successful.”