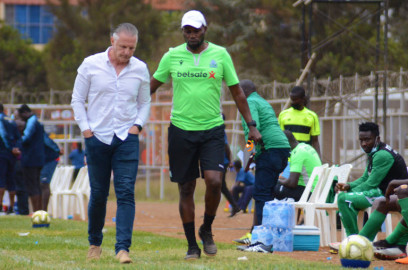 Gor Mahia FC have urged the Confederation of African Football (CAF) to consider contracting its own medical officers to carry out COVID-19 PCR tests for clubs.

Gor’s Team Manager Jolawi Obondo suggested the current system that allows clubs to be responsible for their own tests and those of visiting tests makes the situation susceptible to opacity.

His sentiments come after two Gor players were locked out of the CAF Confederations Cup match against Otoho dÓyo of Congo are still held in quarantine in Congo following positive COVID-19 tests.

The duo, striker Jules Ulimwengu and midfielder John Ochieng, will miss the return leg in Nairobi.

‘’It’s high time CAF appointed their own doctors to go about testing players, especially those who land in foreign territories. What is going on right now is suspicious and this will derail football in Africa,’’ Jolawi said.

The total number of Gor players eligible for this competition is 16 with Sydney Ochieng’s injury clipping it to 15. The absence of Ulimwengu and Ochieng has continued to worsen the situation with the squad now down to 13.

‘’Philemon Otieno also got injured while in training in Congo and did not play away. We are working on physiotherapy to see if he can make it in the return leg,’’ Jolawi added.

Should Otieno fail the fitness test by Sunday, it will mean Gor will have a goalkeeper as the only substitute in the bench.

It will also mean all players who will start will play for 90 minutes without substitution, unless the reserve goal keeper is deployed in any of his unusual positions in the pitch.

Gor lost the first leg 1-0 away in Congo and will need at least a 2-0 win to advance to the lucrative group stage.

The match will be played on December 5, exactly 34 years ever since they lifted the same trophy, then known as Nelson Mandela Cup.