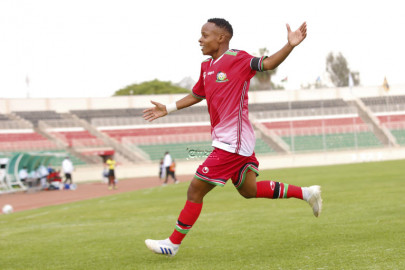 Without a doubt Mwanahlima “Dogo” Adam is one of the most talented female footballers we have in the country. Dogo as she is fondly known, who plies her trade with Turkish side, Hakkarigucu Spor, captures the many moments since rising from Kilifi County to become a star of the game.

She recounts her experiences, struggles, goals and vision to our chief women football writer Geoffrey Mwamburi.

Q. How did it all start, and did you envisage career in football?

I was born and raised in Likoni, Mombasa County and I can say I discovered my talent in football when I was in class two, schooling at Vyemani Primary, a school in Likoni known for producing many talents. While in primary school, I represented Vyemani in school competitions (KPSSA) and become a star in the region.  I was invited to play for the national team at junior levels but didn't do much because I kept geting homesick and demanding to go back home.

Q.  Tell us about your family

I have three siblings, two sisters and one brother. My dad is not into football and always discouraged me from playing, insisting it was not financially rewarding. On the other hand my mother backed me up and supported me to keep playing because two of her brothers are footballers.

Q. Who is your role model in football and who motivated you?

I can say I just found the passion and go the pure talent because I cannot recall having someone I looked up to for their footballing abilities. Much later after my career had picked steam I grew to admire Eden Hazard (Real Madrid forward) for his dribbling and the type of goals he scores. I also love Christian Pulisic of Chelsea.

Q. All your football mentors has Chelsea background. Does it mean that you are also a Chelsea fan?

That goes without saying. Yes, I am not only a Chelsea fan but a die hard one. I always support them even through their downfalls and I can’t imagine supporting another team.

Q. Dogo tell us a bit about your secondary school?

After completing my high school level, I joint ST. Johns Kaloleni in Kilifi County for my High school studies. While schooling, I got bigger platform to nurture my talent because already the school had made it’s named as football powerhouse, producing quality players not only in the school but who also featured in the Women Premier League coast clubs while in school. I was the best by then. I become famous, fans could cheer on me while on the pitch and opponents’ teams would always ask in any competition if I was in the starting list because they knew I would terrorize them in front of the net.

Q. What followed after Kaloleni Girls?

After doing my KCSE exams, I was called upon by Coach Joseph Oyoo (former coach at my school) to join Mombasa Olympics club which by then was taking part in the Women Premier League. The team was earlier known as Coastal Queens based in Bomu, Mombasa but was later changed to its current name after Sponsors left and that’s when we decided to reallocate to Tudor near Saba Saba. I featured for them till 2018 and that’s the time I asked for a break because I felt it was monotonous for the same coach from Primary level all through to high school to continue coaching me. I felt I was grown enough to do things on my own and that’s the time I joined Thika Queens in the Kenyan Women Premier League.

Q. How did you join Harambee Starlets?

First of all I in 2015 while in form three, I was called upon to join the National team under 17  which was started by then and my call upon happened while I was in Embu in the Secondary School National level and that’s when I rose to Harambee Starlets in the following year. My first math with the National team was in an international friendly match against Tanzania where I scored and I cemented my place to the team up to date.

Q. Tel us about you low moments?

I think it was in 2016 when still in the national team which was gearing itself for the African Women Cup of Nations tournament (AWCON) which was scheduled for Yaoundé Cameron. For real I was in the traveling list but I couldn’t make it because I was almost sitting for my KCSE exams. I pleaded with the school management to allow me to go in vain. I had nothing left to do instead of just letting it go. That was the first time Harambee Starlets was taking part in the continental event since inception. I really felt bad because I thought after helping the side to qualify I could be among the ones writing the history in Cameroon. We are currently playing our AWCON qualifiers, we defeated South Sudan and we will meet Uganda next in our second round, this is a good opportunity for us as Harambee Starlets to qualify to the 2022 Continental showpiece in Morocco and I am sure I will have another chance after failing to attend in 2016.

Q. Tell us a bit about life in for Thika Queens

As I have told you earlier, I joined Thika Queens because I felt I needed change. I am from Coast and I had played in the region for long so it was time for change, that’s why I opted for a move. Thika is a good team, currently ther are the Women Premier League Champions and it was a good move. I don’t feel like I am missing Mombasa Olympics because it was relegated to lower division and because Thika plays in the Premier League, I feel  it’s a big deal for me. Life in Thika is good, as you can see I have even added weight (jokingly).

Q. You landed a deal with Israel side Maccabi Holon in December 2020, but it didn’t work. What went wrong?

Yes, they had given me 6 months loan deal having a clause to be extended depending on her performance but unfortunately my stay lasted only few weeks before she was released alongside other foreign players, after the club failed to obtain the International Transfer Certificate (ITC) from the respective countries. I really felt let down, I cried for some time because I couldn’t imagine that golden chance had disappeared and was not my individual fault. That was not the first time for me to lose a golden opportunity. In February, 2020 I reached a deal with a Swedish top flight side Djurgardens IF DFF but it fell through after the Swedish embassy reportedly twice denied me a visa. I had no option but to reunite with my club Thika Queens hoping one day I will fulfill my dream of playing professional and you see here I am in Turkey.

Q. You are now plying your trade with Turkish side Hakkarigucu Spor on a one-year loan deal, speak a bit about this.

Yeah joined them early October 2021, after their scouts were pleased by my style of play and my talent at large and decided to give me an offer. I signed one year loan deal with an extension options if I will prosper. Being a loan deal it means I am a thika queen’s player but my aim is to work hard and maintain high disciple so that they give me a permanent deal.

Q. Tell us about your hobbies?

When I am not playing I prefer sleeping. A player like me needs a good rest for good body functioning. I don’t do outing may be occasionally. I also do listen to music mostly Swahili and Bongo.

I love Ugali Sukuma and beef

Q. What advice can you give to the upcoming footballers who are looking up for you?

I am advising them not to lose hope even in their low moment. Nothing last forever, the situation they are now will come to an end and brighter day will emerge, they should always trust in God.

Q. Are you seeing someone currently?

No, I am not seeing someone, in short I am very much single. I think I am satisfied as I am may be if it happens in future. For now fully focus is on my career and not dating.

I want to thank all my fans for giving me support and I promise not to let them down. I am urging all of them to follow me on my social media platforms (Facebook and Instagram)  by the name (Jereko Dogo Adam)  and we shall connect more.