'We live in fear:' Daughter of former Saudi official says kingdom attempted to lure her to consulate in Istanbul 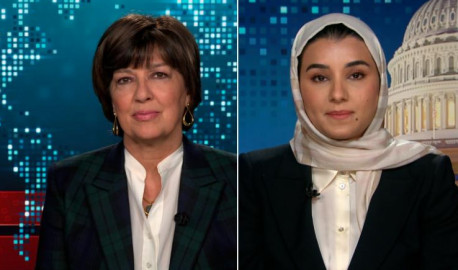 The daughter of a former top Saudi intelligence official has told CNN that representatives of the Saudi government attempted to lure her to the same consulate where Jamal Khashoggi was murdered in Istanbul, as part of a series of threats against her and her family.

Hissah Al-Muzaini, the daughter of former Saudi official Saad Aljabri, told CNN's Christiane Amanpour on Wednesday that the kingdom encouraged her to go to the "consulate in Istanbul. They tried to encourage me to go there."

"I'm lucky I didn't go or else my kids wouldn't have a mum and dad," she said.

Al-Muzaini's family has previously made this allegation in a civil suit filed earlier this year. According to the suit, Saudi Crown Prince Mohammed bin Salman "attempted to lure Dr. Saad's daughter, Hissah Al-Muzaini to the Saudi consulate in Istanbul." At the time of writing, the Saudi government had not responded to CNN's request for comment on the claim.

Her father Saad Aljabri is currently waging a civil lawsuit in Washington, DC, alleging that bin Salman, also known as MBS, sent a hit team to target him in Canada where he and his daughter live in exile, and that the men involved were intercepted and deported by authorities at Ottawa's international airport.

In a CBS interview aired Sunday, Aljabri -- who had previously served as an adviser to former Crown Prince Mohammed bin Nayef before he was deposed in 2017 -- repeated those allegations against Mohammed Bin Salman Al Saud, the now de facto ruler of Saudi Arabia, and claimed that he has wrongly imprisoned two of Aljabri's children, Sarah and Omar, in Saudi Arabia.

Aljabri's two adult children were convicted of money laundering and attempting to escape, and sentenced to prison in what Human Rights Watch called an "unfair" trial that was "an apparent effort to coerce" Aljabri to return to Saudi Arabia.

Speaking to Amanpour, Al-Muzaini reiterated her father's allegations and also claimed that her husband has been abducted. "We've been living a real-life nightmare for the past four years," she said. "Imagine yourself, your dad has been targeted with hit squads, your siblings (have been) imprisoned and accused of things they've never done ... your husband being imprisoned, kidnapped and then tortured."

Al-Muzaini's husband, Salem, was arrested last year, according to Reuters. Al-Muzaini told Amanpour that her husband had previously been "forced under torture to sign off all his assets and wealth in order for his freedom" after being detained in Riyadh's Ritz-Carlton in 2017. MBS had detained around 200 Saudi royals, officials and business executives in the name of an anti-corruption campaign at the time.

The current treatment of her husband and siblings was part of what Al-Muzaini described as a "personal vendetta that MBS has" against her father. Referring to bin Salman, she said he "fears ... what my dad knows," and that the information her father has may present a barrier between bin Salman and the throne.

"We live in fear. We always look over our shoulder. We don't feel safe. I don't know how we can feel safe when people like this are chasing family members and sending hit squads and killing people in embassies and consulates."

CNN has repeatedly reached out to the Saudi Embassy in Washington and the Saudi Foreign Ministry regarding Al-Muzaini's claims but no one was available to comment at the time of writing.

In a statement provided to CBS, the Saudis denied the allegations and called Aljabri "a discredited former government official with a long history of fabricating and creating distractions to hide the financial crimes he committed, which amount to billions of dollars, to furnish a lavish life-style for himself and his family."

In January, a number of Saudi state-owned companies alleged in a counter lawsuit in Canada that Aljabri had embezzled billions of dollars while he served as a government official. A Canadian court -- citing evidence of fraud -- has subsequently frozen Aljabri's assets. When pressed on this development, Al-Muzaini said "my dad denied all the allegations and the lawsuit is still ongoing."

"I'm a proud daughter and what I know is the method that they are taking by involving family members, kidnapping, torturing, imprisoning, is not the right way that governments should act. That's what I know," she said.

Al-Muzaini was speaking to Amanpour from Washington and made a public appeal to President Joe Biden "to intervene and help us save and reunite our family."

"We will only feel safe when MBS has been prevented from doing what he's doing," she added.