‘No gate tickets!’ Sol Fest totally sold out 4 days ahead of concert 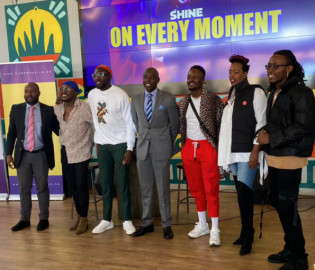 Celebrated Grammy-certified music group Sauti Sol has made history as they announced that they sold out tickets four days ahead of their much-anticipated concert dubbed Sol Fest this weekend.

The boy band said they sold out over 5,000 tickets ahead of the event set for December 12 at the Carnivore Grounds.

Sol Generation Records partnered with Homeboyz Entertainment to produce the inaugural gig that will take place in different venues across the country.

Myke Rabar, the founder and C.E.O of HomeBoyz Entertainment, made the news public in a joint press conference held on Wednesday.

“We are happy to announce that four days to the gig, our VIP as well as regular tickets have been officially sold out. We have sold out over 5,000 tickets,” said Rabar.

“This is history in the making. Despite the fact that we are not cheap, this shows that there is a big demand and hunger for local talent.”

The HomeBoyz chief executive officer proceeded to add that tickets to the event would not be available for purchase at the gate.

“No tickets will be sold at the gate. We have sold out tickets and we have a capacity enough for a certain number of people. The rest that fail to make it to the venue, can watch the concert live on Homeboyz TV as well as all Sauti Sol platforms,” he stated.

The band will perform their ‘Midnight Train’ album live for the first time for their Kenyan audience.

“I am really excited to finally be back on the Kenyan stage and perform our album ‘Midnight Train’, which we have never performed live before to our Kenyan audience. We have been working on that set, literally for the entire pandemic period. It’s going to be a tight show,” said Fancy Fingers, one quarter of the group.

Fancy Fingers shed some light on the confirmed line up that is set to perform at their concert, as part of their iconic live acts.

“The line up is amazing as well. We have Femi One, Chris Kaiga, Wakadinali, Nandy and of course Sol Generation’s Nviiri The Storyteller and Bensoul, just to mention a few,” he stated.

Moriasi Omariba, the General Counsel of Sauti Sol, informed that the music group as well as Sol Generation would be selling their own merchandise at the show, following their partnership with Home 254.

“There will be merchandise on ground sold by Sauti Sol and Sol Generation; Bensoul and Nviiri The Storyteller. They will also be available on pre-order for your Christmas gifting,” said Omariba.